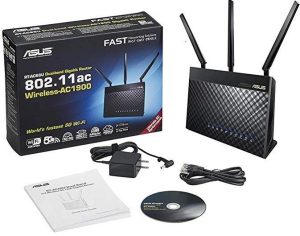 This section of this website provides detailed information on all of the aspects of cabled and wireless networking that use the networking capabilities of Windows from Windows XP to Windows 10. Information is provided on cabled peer-to-peer networks with additional interesting information on network home servers, drive mapping  and network-attached storage (NAS) devices.

Wireless networking and the wireless-networking – WiFi standards 802.11b, 802.11g, 802.11n, 802.11ac – are dealt with, including information on ADSL modem routers and cable routers, Bluetooth connectivity is not a wireless network technology but can be used in similar ways, so it is also dealt with.

Click on CONTENTS to skip the following useful information on networking and go to the CONTENTS menu on this page.

Mote that dual-band routers can broadcast on both the 2.4GHz and 5.0 GHz bands, but they cannot swap between them in order to broadcast the best signal. What they do is make it possible for client network adapters on computers that support either or both of the bands to receive broadcasts. For example, some older network adapters on laptops might only support the 2.4GHz band, so they will be able to receive a signal as well as laptops set to use the 5.0GHz band.

Here are the new names for the 802.11 wireless standards currently in use:

Note that Wi-Fi 4, 5 and 6 are backwards compatible with one another, so Wi-Fi 4 and 5 devices won’t stop working when the Wi-Fi 6 standard is introduced.

Here are what would have been the new names for the superseded 802.11 standards:

What are Wi-Fi 5 and Wi-Fi 6? Why Wi-Fi is introducing catchy names for different standards –

Map a network drive in Windows 10

“Map a network drive to get to it from File Explorer in Windows without having to look for it or type its network address each time.”

POST – All about Ethernet network cables – Cat 6 to Cat 8

POST – How to make use of a router’s USB port

POST: What to do if your ISP-supplied modem router can’t keep up with multiple Wi-Fi demands

POST: What you need to know about WiFi routers and related matters