You are here => Home => Should you buy a Chromebook laptop?

I need a new laptop. Should I buy a Chromebook? 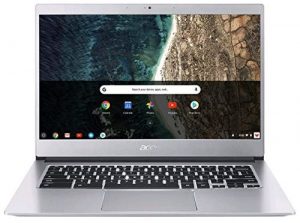 The following information applies to most Chromebook laptops with the specifications of the Chromebook 14 models.

How to install Linux on a Chromebook using Crouton –

Using a Virtual Private Network (VPN) on a Chromebook

Most VPN services have limitations. Such as only being allowed to connect a maximum number of devices at once. That means having to decide which systems in your home get VPN protection. The VPN’s client software often only installs  on the most popular operating systems, such as Windows and Apple’s iOS and OS X, which makes it difficult or impossible to set up a VPN connection on a Chromebook, games console, etc.

Running a full distribution of Linux alongside the Chrome operating system

A Chromebook is in a locked-down state for maximum security. However, by enabling its “developer mode”, it is possible install the free full Ubuntu distribution of Linux alongside the Chrome operating system and switch between Ubuntu and Chrome with just a keystroke. Then the user has access to  one of the most powerful distributions of Linux that can run full Linux applications. It is also possible to replace the Chrome operating system with other Linux distributions.

Note well that from a performance point of view it is NOT a good idea to buy a Chromebook that has less than 4GB of RAM memory and 32GB of storage capacity.Most of the current machines come with 4GB of memory. However, machines with 8GB are becoming available. Some people use their Chromebook with two monitors. If you open many tabs at the same time when online, then the more memory the better.

A Chromebook is designed primarily to access the web and as such uses the Chrome web-browser that Google has turned into a basic Linux-based operating system. Moreover, most of the software the Chrome operating system uses is online (is cloud-based). Therefore, 32GB is plenty of storage space. A laptop running Windows 10, applications and tools would use up most of 32GB of storage space.

Also bear it constantly in mind that a Chromebook uses a Google operating system and web browser (both called Chrome) and requires the use of a Google account. In short, Google logs everything that you do on a Chromebook. Nothing is private unless you make use of a Virtual Private Network (VPN), which can be free or paid for.

Which components of a Chromebook are upgradable?

If a Chromebook has a vacant memory slot (which means that the memory is not built into the motherboard) or it has one or more memory slots with RAM memory already installed in them that can accept SO-DIMM memory modules with higher capacities (e.g., 4GB modules instead of 2GB modules), you can upgrade the memory. If the available specifications don’t provide information about the memory upgradability, contact the manufacturer. The following YouTube video shows how to upgrade the RAM memory on a Chromebook made by Acer that has a spare memory slot.

How to Upgrade the RAM on Your Chromebook –

The eMMC storage capacity is a component the is soldered to the motherboard, so you cannot upgrade it unless you can remove the existing chip and replace it with one that has a higher storage capacity.

You might be able to upgrade the RAM memory, SSD storage, battery

Depending on the model, batteries can be built-in or removable, If removable, they can be replaced. Likewise, RAM memory and SSD (storage) modules can be soldered to the motherboard. If so, only owners who have the necessary technical and soldering ability who can obtain higher-specification components can upgrade their machines. The processor is probably built into the motherboard. The cases can also prevent the user from opening them easily. Therefore, if upgradability is important to you, you must find out what you can upgrade before purchasing a particular make/model. If the manufacturer’s website and reviews of a particular model don’t provide that information, ask the manufacturer by email or by phone.

The minimal storage capacity for an SSD or eMMC on a current Chromebook should be 32GB. 16GB is too low, especially if there is no SD card slot.

Replacing the battery of a Chromebook

You can replace the battery on many of the Chromebooks made by the major laptop manufacturers. However, the battery can be soldered to the motherboard. If so, you require the technical ability to change the battery. You also need a source for a new battery, such as the machine’s manufacturer or elsewhere.

Replacing a battery is a relatively simple process. The following YouTube video shows how to replace the battery of an Acer Chromebook.11. Search YouTube for a video on battery replacement for your make/model of Chromebook.

How to Replace Your Acer Chromebook 11 Battery –

Using Gmail as a POP3/SMTP client

A Chromebook uses Google’s Gmail for email. Fortunately, Gmail can be used as the email client for any other email setup that uses the POP3/SMTP protocols to send and receive email.

Note that POP3/SMTP is disabled by default on Outlook.com, but it can be enabled as shown in the following article.

Below are two YouTube videos on how to send and receive email to and from POP3/SMTP email accounts by using Gmail as the client.One video might clear up any confusion caused by the other.

Can you use a Chromebook for course work?

You can use Google docs/sheets – Google’s equivalent of MS Word or Excel. They work offline as well as online, so if you have no web access, you can save the files locally and they will synchronise with your Google account when you go online. You can also use the free versions of Word, Excel, PowerPoint and OneNote that a free Microsoft Outlook.com web email account provides.

Is it possible to use Microsoft Word, Excel, etc?

As mentioned, you can run Google Docs or Sheets as Google’s replacement for Microsoft’s Word or Excel. I have found Google’s offerings inferior to the Microsoft programs, so I run the free Microsoft Web Apps programs which can be obtained through the Google Play Store. Word – Excel – OneDrive – OneNote and Outlook are available to add as apps. You cannot run the full Office suite – Office 365 – on a Chromebook.

Running Microsoft Office on a Chromebook – How to install Online Word, Excel, and PowerPoint –

There is no Ethernet connector. Networking is wireless only, but you can use a USB Ethernet network adapter if you have to use a wired connection. Something like the “UGREEN USB 2.0 to 10/100 [Ethernet] Network Adapter, USB to RJ45 LAN Wired Adapter”, an image of which appears below.

I prefer using cable connections for everything. because wireless devices bath a room in unhealthy microwave radiation constantly. I turn Wi-Fi and WPS off in my broadband router’s settings. Routers that support Wi-Fi Protected Setup (WPS) are a serious security threat unless the feature is disabled. 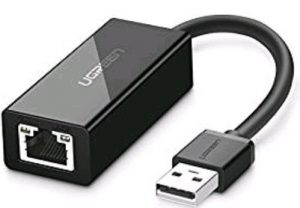 Printing from a Chromebook

To print from a Chromebook requires installing an extension on the Chromebook that the printer manufacturer (HP, Dell, Brother, etc.) provides. Alternatively, set the printer up online on Google Cloud Print.

“This video SAVED me! I was struggling with all of those HP directions, but your video was concise and the steps were easy. Thanks to you, I have my new HP Envy [printer, scanner, copier] connected to my Chromebook and it was easy.”
“In my opinion, using HPs Chrome app works better than Google Cloud Print if you are on the same network. Just type in the [printer’s] IP address, which it provides itself if it has touch-screen controls, name it and you are good to go. It is easily the most secret app on Chrome OS. Check it out on the Chrome web store [Google Play Store].”

Here is the information on printing to an HP printer from a Chromebook on the HP site:

The Linux-based Chrome operating system runs little more than the Chrome web browser. Viruses and malware cannot infect a web browser as you are browsing the web and it is the same with the Chrome operating system. Therefore, it is not necessary to use a malware scanner. Moreover, Chrome performs an integrity check on startup. If the system is different from what it should be, it knows something is out of order and  it can warn you or rebuild itself from the original software to get rid of what it considers is out of order.

There are also very few malicious apps for the Chrome operating system, The biggest security threat is downloading a malware app that is masquerading as a legitimate app or one that stages a false infection and then requires payment to get rid of it. Therefore, only use apps from the Google Play Store. Look at the information that is provided about the downloads of an app – number of downloads, ratings, etc. – in order to come to a conclusion about its validity.

Install Android apps on your Chromebook

“You can download and use Android apps on your Chromebook using the Google Play Store app.

“Currently, the Google Play Store is only available for some Chromebooks. Learn which Chromebooks support Android apps.”

“Your Chromebook automatically checks for and downloads updates when connected to Wi-Fi or Ethernet.”