You are here => Home => Does using a VPN protect privacy?

Does using a Virtual Private Network (VPN) protect your privacy from hackers and legal invasions such as the UK Snoopers Charter? 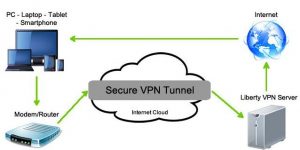 Illustration of a virtual private network – VPN – tunnel. Click on the image to view its full size

The image above provides a simple illustration of how a VPN service works. A VPN tunnel is protected by data encryption. The Internet uses IP addresses to communicate, as do private networks.

Almost as vital from a privacy point of view is the fact that a VPN service changes the identifying IP address of your broadband router to the IP address used by its Internet server. In short, that setup makes your Internet traffic appear to originate from not only a different computer than yours but also from a different location.

Using a VPN service is particularly effective when using Wi-Fi hotspots in cafes and hotels. That is because the connections usually do not use encryption. Without the use of encryption by a hotspot, Wi-Fi eavesdroppers can obtain user names, passwords and the data transmitted over an insecure connection.

The dangers of using a free VPN

Note that the free VPN that the Opera web browser provides is not listed in the following article.

Set up a VPN on a Router

It may be possible to set up a paid-for VPN on your broadband router instead of installing its client software on the computer you want to use the VPN on. The following article provides information on how to do that. You may or may not be able to install it on the routers that ISPs provide. You will have to contact your ISP to find out if that is possible with its router.

How to set up a VPN for your router –

“Setting up a VPN on your router is the most effective way to guarantee privacy and security on all your home devices.”

VPN services can be free or paid for. As with everything free, such as the free offerings from Google and Facebook, you probably have to pay by providing your private information for use in providing you with customised adverts. The Opera web browser provides a free VPN that does not appear to use your private information by selling it to advertisers. But, you are probably best off by paying for a VPN, which are relatively cheap. The following link provides useful information on the best paid-for VPNs and their monthly costs.

The following Wikipedia article provides the technical details on VPNs in more detail.

The Act forces Internet Service Providers (ISPs) to keep track of the websites their customers visit and makes legal the hacking of the personal devices of individual citizens by 48 government departments and the UK’s security agencies. Moreover, all UK ISPs have to keep logs of their customers web access for at least 12 months.

Outrageous given that we all should know by now that the police know about all of the terrorists who have launched attacks in the UK, USA and France, but were not keeping them under surveillance. Yet, apparently, to thwart terrorism, the UK government is allowing itself to invade the Internet privacy of all of its citizens. A situation made very much worse by the fact that government departments are often successful targets for hackers and cyber criminals. As was proven recently by the NHS cyber attack.

In other words, if the government and its agencies can access your web history and electronic devices, the hackers, who have much more expertise, can probably also do so by hacking into the government departments – or by bribing the people who work for them into providing them with information.

Can I protect my privacy from these Orwellian snoopers by using a VPN?

The paramount question with regard to this grossly intrusive Orwellian state of affairs has to be: Can I protect my privacy from this legal snooping?

Fortunately, using a VPN service does prevent the UK government and its security agencies from being able to employ the Snoopers Charter immediately against anyone who accesses the web via computers and smartphones. Legally, they would have to go out of their way to snoop on you by accessing the VPN service that is in use. Which would be made all the more involved, maybe impossible, if you made use of a VPN that is not based in the UK. Fortunately, many foreign VPN services do not log Internet activities, therefore they are not able to provide any of the information that the snooper(s) might be after.

With so many government departments able to use the Snoopers Charter, using a foreign VPN service is the best way to protect yourself. They would really have to have a pressing need to go ahead with obtaining information about you if they have to go to traceable, time-consuming lengths. A scenario that is highly unlikely to be the case with the vast majority of Internet users.

A likely scenario in which the Snoopers Charter could be put to use is when a government department or council tries to use the snooping powers to find out if people are living with partners while claiming council tax reductions or more state pension, etc., as single people. If the snooping process is very time-consuming, they are unlikely to pursue it.

Now that even ISP services are able to sell your browsing history, you have to take action to protect your privacy as much as you possibly can from these information parasites.

To give yourself the best protection from snooping, get yourself a foreign VPN service that covers all your various devices – desktop and laptop PCs, tablets and smartphones. Many VPN services offer smartphone and tablet apps, the use of which would give you the best multi-device protection against government snoopers. Liberty VPN, paid-for and based in the USA, looks as if it is a good choice for a home Internet connection. You have to find out if a particular service provides apps for mobile devices – smartphones and tablets.

There are free and paid-for VPN services. Look them up on the web and then read reviews. I would look for well-established services that uses OpenVPN, which is open-source VPN software that benefits from having an entire community of developers developing it and fixing bugs.There is plenty of information on VPN services on the web. Spending a few hours researching them should provide you with all of the information you need.