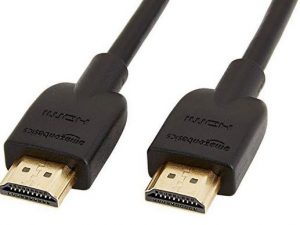 Connectors of an HDMI cable for an HDMI-to-HDMI connection

In case you aren’t aware of this, an HDMI-to-HDMI connection carries video and sound. An HDMI cable can also supply an Ethernet network connection. Also note that a DVI cable does not carry sound, but you can use a DVI-to-HDMI adapter that connects a DVI cable to a HDMI cable that is then connected to an HDMI port.

Everything is working, all of the monitor’s audio settings on its settings menus are set to HDMI, but there is no sound from the monitor’s inbuilt speakers that work properly when using a non digital VGA D-Sub connection.

Before I decided to try using an HDMI connection, it was a VGA D-Sub connection and the sound was provided via a separate cable connected to the green output port of the motherboard’s onboard sound chip.

When I click on the Nvidia Control Panel (in the Windows Control Panel) and select the Set Up Digital Audio => BenQ 2270 => Open Windows Sound settings, on the Playback tab there are only two options – Speakers and Realtek Digital output. (See image below.) System => High Definition Audio Controller is enabled in the Device Manager. that has to be enabled as the default option in order to get HDMI sound to work, but there is no such option. 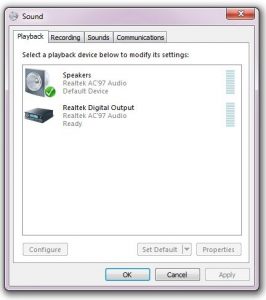 No HDMI sound – Win7 Playback tab in Control Panel => Sound. Click on the image to view its full size

I have installed all of the Nvidia drivers and updated them. I have also made sure that System => High Definition Audio Controller is enabled in the Device Manager.

Under Sound, video and game controllers in the Device Manager, there are only these two installations: Realtek AC’97 Audio and Nvidia Virtual Audio Device (Wave Extensible) (WDM).

As I said, nothing comes through to the Playback tab from the Nvidia graphics card that has VGA, DVI and HDMI output ports.

There are settings for HDMI audio in the monitor’s settings

Many people have reported this problem online, including not getting HDMI sound to a TV connection, but I have had no success with the suggestions for a fix.

Both the graphics card and BenQ monitor are brand new and both provide a D-Sub, DVI and HDMI port. The BenQ monitor is a model that has built-in speakers. It provides an analog audio port for the VGA graphics,

The HDMI cable is brand new, specifically bought for HDMI graphics and sound. I didn’t buy an expensive cable because I keep reading that they are a rip-off, that the cheap ones are just as good. The reviewers report that it works wonderfully well.

Here the cable is on Amazon:

The manuals for both the GeForce card and BenQ monitor just show how to install them, nothing else.

Used Chat on the Nvidia.com site

I used Chat on the Nvidia.com site and the tech guy gave me a link to a Nvidia driver that has the option to clean install by removing the existing installation.

The graphics card is made by Asus, but the driver from Nvidia checks for compatibility and installs, so the Asus card must use the Nvidia drivers.

I read that if the existing sound is provided by an onboard chip (Realtek AC’97 in my case) the new graphics driver disables it and installs an HDMI option as a Playback device.

That did not happen. Only the Realtek Digital Output  and Speakers were showing as Playback devices, so I went into the standard BIOS  – it’s an old MSI (MS 7093) motherboard from 2005 that runs an AMD Athlon 3800+ X2 dual-core CPU that is still going strong –  and found that the Realtek audio was still enabled. So I disabled the onboard sound and clean-installed the Nvidia driver.

Unfortunately, there are still no Playback devices showing under Sound and there is a red cross on the sound icon in the Windows notification area.

It looks as if the motherboard’s device drivers are too old to deal with sound from a graphics card instead of the onboard sound chip and I’ll have to go back to using VGA and Realtek AC’97. Due to the age of the motherboard, there are no new drivers available from MSI.

The HDMI video display looks exactly the same as the VGA one, so it’s no big deal. The PC is just used as a workstation.