Useful free PC diagnostic tools/utilities that provide useful information on a computer’s components, diagnostic tests or that monitor their activities

There are several very useful free diagnostic and information and monitoring tools that are either provided as part of Windows XP/Vista/7/8.1/10 or by third-party developers.

The Windows DirectX Diagnostic Tool is the diagnostic tool for graphics and sound that is provided by DirectX, which is developed by Microsoft and is installed on every computer running a version of Windows – XP/Vista/7/8.1/10. You can discover the version of DirectX that is installed by running it. To open it, press the Windows key (the one with a flag on it) and the R key and enter dxdiag in the Run box that is presented.

Note that the control panel for discrete AMD and Nvidia graphics cards – accessed from the Windows Control Panel – provides a graphics-card diagnostic program other than the Control Panel => Display item that controls the display settings. 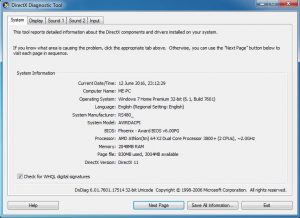 The Windows DirectX Diagnostic Tool in Windows Vista/7/8.1/10. Click on the image to view its full size

By default the option “Check for WHQL digital signatures” tells the user if there are any installed drivers that have not been passed by Windows Hardware Quality Labs testing. Untested graphics and sound drivers can be a source of problems. The current version only informs the user that there are no problems or that there problems with the display and sound and input devices such as the keyboard and mouse. No tests can be performed. I have never had any problems when I have used this tool, so I don’t know how it reports problems.

The Windows Memory Diagnostics Tool performs tests on the RAM memory of the computer it is used on. Faulty memory causes all kinds of peculiar problems that are difficult to diagnose, such as files that become corrupted.

Alternatively, you can use the free MemTest86. –

If your graphics card appears to be giving problems, you can stress-test it with this free utility. Install the tool and run a time-based benchmark for about 500,000 milliseconds (5 minutes), which should produce enough stress to produce a crash if the graphics card is faulty. –

“HWMonitor is a hardware monitoring program that reads PC systems main health sensors : voltages, temperatures, fans speed. The program handles the most common sensor chips, like ITE® IT87 series, most Winbond® ICs, and others. In addition, it can read modern CPUs on-die core thermal sensors, as well has hard drives temperature via S.M.A.R.T, and video card GPU temperature.” –

“CPU-Z is a freeware that gathers information on some of the main devices of your system :

“If you need a tool that can change your computer’s fan speeds, read the temperatures of your motherboard and your hard disk, read voltages and fan speeds and check the status of your hard disk using S.M.A.R.T. or SCSI attributes, then you came to the right place.” –

“GPU-Z is a lightweight [free] utility designed to give you all information about your video card and GPU.” –

“The Belarc Advisor builds a detailed profile of your installed software and hardware, network inventory, missing Microsoft hotfixes, anti-virus status, security benchmarks, and displays the results in your Web browser. All of your PC profile information is kept private on your PC and is not sent to any web server.” It provides the product keys for Windows and other software that uses them under Software licenses (a left-hand menu item). –

All of the versions of Windows from Windows XP to Windows 7/8.1/10 come with several very useful Administrative Tools. Here are the links to them on this website: