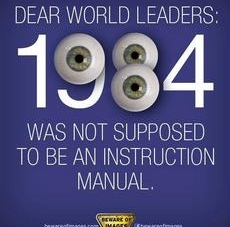 The UK is apparently facing highest-level terrorists threats but has left its borders and airports largely without protection. What the media calls a Snoopers Charter was passed by the House of Lords and became law in November 2016.

This development is of the utmost importance because the freedom of the web itself is now under threat by the mindlessly nihilistic, paranoid, despotic miscreants brought to the helms of the West by crippling political correctness.

Forty eight government departments have access to everyone’s web-browsing history as set out in Schedule 4 of the Investigatory Powers Act, the official name for the Snoopers Charter.

The staff in each of the 48 government departments must have a stipulated minimum rank in order to access the public’s private data.

Believe it or not, the Foods Standards Agency, Competition and Markets Authority and the Gambling Commission have access to your web-browsing history. Access a link to the full list in the next item.

Read the following article on the Daily Mail online for more information, including the list of the 48 government departments that can legally access everyone’s web-browsing history that Internet Service Providers have to keep for a year by law.

Revealed: The 48 organisations that can see your entire online browsing history, even if you delete it –

Thanks very much. Don’t we all know that high-ranking government people have been or are allegedly involved in all kinds of illegal activities? Such as the current investigation into the Westminster paedophile ring that has so far seen three chairmen, all of them females, take and then leave the job. Mostly because the victims don’t trust them to do the job properly. Maybe the establishment thinks that female judges appear as less corruptible. Maybe no male judges or former judges were available who were willing to do a whitewash job. It is anyone’s guess what is going on here.

Apparently, the UK government was accessing private web-browsing records illegally all along. But now their snooping activities are legal.

The Dark Web that criminals and terrorists use to evade detection

In case you are not aware of this, there is something called the Dark Web that criminals and terrorists use to evade detection. The search engines do not include anything in the Dark Web in their search-engine results because their site-logging computers cannot access its contents.  Therefore, this Snoopers Charter is not going to lead to the capture of terrorists before they can launch attacks, so its only purpose must be to spy on the public. This is proven by the fact that the police had all of the perpetrators of the terrorist attacks in England, France and the USA on their watch lists but failed to prevent their attacks. Almost as soon as the terrorist attacks took place, the police knew who the terrorists were.

The US and the UK have been dumbing themselves down educationally for many decades and this has resulted in high-order people no longer holding the reins of power, just low-order decadent phony liberals who are most inclined to engage in low-order despotism.

Friedrich Nietzsche on the corrupting decadence of our modern predicament

This is what the nineteenth-century German philosopher, Friedrich Nietzsche, wrote about the decadence of our predicament in his short book, Twilight of the Idols:

“Liberal institutions immediately cease to be liberal as soon as they are attained: subsequently there is nothing more thoroughly harmful to freedom than liberal institutions. One knows, indeed, what they bring about: they undermine the will to power, they are the levelling of mountain and valley exalted to a moral principle, they make small, cowardly and smug – it is the herd animal which triumphs with them every time. Liberalism: in plain words, reduction to the herd animal.”

“The entire West has lost those instincts out of which institutions grow, out of which the future grows: perhaps nothing goes so much against the grain of its ‘modern spirit’ as this. One lives for today, one lives very fast – one lives very irresponsibly: it is precisely this which one calls ‘freedom’. That which makes institutions institutions is despised, hated, rejected: whenever the word ‘authority’ is so much as heard one believes oneself in danger of a new slavery. The décadence in the valuating instinct of our politicians, our political parties, goes so deep that they instinctively prefer that which leads to dissolution, that which hastens the end.”