The charts below that show the subjects, by percentage, studied by boys and girls who sat for the A Level (higher) and GCSE (lower) exams in 2018. 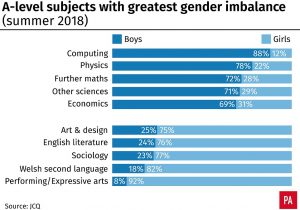 A Level exams taken by males and females in 2018. Click on the image to view its full size 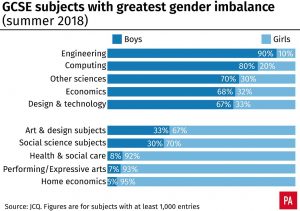 GCSE exams taken by males and females in 2018. Click on the image to view its full size

As can be seen, male and female students tend to study different subjects. There is not much common ground between the sexes. At both A Level and GCSE, around 75% of boys take the harder STEM (Science, Technology, Engineering and Mathematics) exams and the girls take the easier non-STEM subjects, some of which are not sciences but are made out to be, such as social sciences and home economics.

Boys are supposed to be catching up to girls in getting the highest grades at GCSE level, but look at the subjects that 75%+ of girls take – Art and Design, Social Sciences (sociology, etc.) Health and Social Care, Performing and Expressive Arts and Home Economics (home finances). On the other hand, boys study mostly the STEM subjects that feminists are urging girls to do without much success.

Therefore, since valid comparisons require comparing like with like, the grade results attained by the boys and girls cannot be compared. However, that fact doesn’t prevent the UK government from doing just that, compounded by the mainstream media reporting the results as such. It’s pure idealistic deception. This has now been going on for decades.

The GCSE grades have been renamed. The A-to-G grades have been replaced with 9-to-1 grades, with 9 being the highest grade. A 4 grade is the equivalent to a C grade. Apparently, in mathematics, a mark of 17% can achieve a 4 (C) grade. Ridiculous given that under 40% (F grade) was a failure in the previous and far superior O and A Level exams.

Read an article on the 2018 GCSE results here:

In fact, this deception for political purposes has been going on ever since the UK government started dumbing down its education system by replacing the elite O Level exams with the much lower GCSE exams in 1986. The reason being that when unemployment was considered to be unacceptably high under the Conservative Thatcher government, the O Level exams were not allowing enough students to study for the A Level exams and then go on to higher education in the universities. An exceptionally stupid, short-sighted, short-term solution. Something very easy easy to get into but extremely difficult to reverse.

To make matters far worse, Tony Blair, as Prime Minister, then spent his 13 years in office further dumbing down and feminising the education system by adding course work done during the course to the exam results, breaking the exams down into modules and using multiple-choice questions instead of written answers. (A student can be illiterate and still pass, which is why children aged between 5 and 7 can pass GCSE exams.) Grade inflation became rampant to the point where a quarter of students nationwide were achieving the highest grades, which had been around 5% when the UK had the best education system in the world.

New, supposedly tougher GCSE exams were introduced in 2018, but the percentage of students getting the highest grades increased slightly.

The pass rates fell to their lowest levels since 2010, but from ridiculous heights for the highest A* and A grades that 29.3% of students achieved in the South East of England. That percentage was lower in the East (23.1%) and West Midlands (22.6%), North East (22.8%) and North West (24.6%).  The percentage of boys who got A* was 8.5%, 0.9% higher than girls (7.6%). Which, as with the GCSE exams, is an invalid comparison given that boys tend overwhelmingly to study the more difficult STEM subjects that most girls avoid. Moreover, the 97.6% A-to-E pass rate at A Level means that the failure rate was only 2.4%. The GCSE exams had a similarly ridiculous failure rate.

The A Level exams have also suffered from dumbing-down, feminisation and rampant grade inflation

The A Level exams have also suffered from dumbing-down, feminisation and rampant grade inflation, starting in 1986/87. In fact, to achieve 50%+ of students going to the universities also meant dumbing down degree grades. When 20% of students went to universities from the old O and A Level exams, higher education was paid for by the state. As might have been expected but didn’t seem to have been, the huge rise in university students meant that free higher education became unaffordable to the state and student fees and loans (currently £9,000 a year) had to be introduced.

Course work counting in the exam results was abandoned in 2017

Course work counting in the exam results was abandoned in 2017, which resulted in boys overtaking girls in achieving the highest A* and A grades even though the boys study the most difficult subjects and the girls mostly study the easier subjects.

In 2018 the modular A Level courses – students could resit failed modules during the two year courses – were abandoned for linear exams that students sit at the end of the two-year courses. All of the old-style GCE O Level and A Level exams were non-modular and linear. Students had to sit the exams at the end of the courses and had to resit any that were failed.

Moreover, more than 800,000 students take the A level exams, which means that there are not enough markers to mark written exams, so multiple-choice questions are used that hide a student’s level of literacy and allow students a 1 in 4 chance of guessing the correct answers.

In my opinion, the stupidity (or maybe intentional design aimed at diluting the UK population) involved in engineering this mess, especially since the UK relies on its population to make its living, is staggering. The result has been the importation of huge numbers of qualified people from the EU and the rest of the world to make good the skills deficits created by our dumbed-down education system.

Read an article on the 2018 A Level results here:

Our dumbed-down, feminised, grade-inflated education system still makes it possible for an average student to attain the top grades. Average students then go on to the universities, many of which are really just jumped-up polytechnics converted into universities. Consequently, degree courses also have to be dumbed down in order to keep the drop-out and failure rates at acceptable levels. Read the following articles for more information on the negative consequences.

As three universities teeter on bankruptcy, former lecturer DOMINIC SANDBROOK says an explosion of Mickey Mouse courses and student places have led to idiocy of the first degree –

Note that in the UK there is a tendency in the media to call arithmetic (the mastery of numbers) mathematics. Here is the page on Wikipedia on Mathematics. – https://en.wikipedia.org/wiki/Mathematics