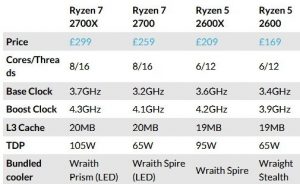 AMD Ryzen 2 5 and 7 – initial prices and main specifications. Click on the image to view its full size

In January 2018, AMD announced the imminent arrival of the second generation of its Intel-beating Ryzen processors called Ryzen 2.

Without a doubt, AMD has made a remarkable transition from trailing Intel badly to becoming the best desktop processor manufacture and posing a serious threat to Intel in the laptop processor market, which AMD has never come close to dominating.

The four models shipped to the UK on April 19, 2018. The image above provides their model names, initial prices and main specifications.

Also note that neither the first or second generations of Ryzen CPUs provide an inbuilt graphics chip, as AMD’s Ryzen processors with Radeon Vega graphics and the AMD APU processors do.

Read more about the very affordable Ryzen processors with Radeon Vega graphics further down in this article.

Max number of GPU graphic cards on a motherboard –

Amazingly, these second-generation processors use a 12mn manufacturing process, which is superior to Intel’s current 14nm process. The smaller the fabrication process, the better. Moreover, they don’t use a new processor socket.

Apparently, AMD has plans to reduce its fabrication process down to 9nm.

All of the second-generation models use AMD’s AM4 socket created for the first generation of Ryzen CPUs. 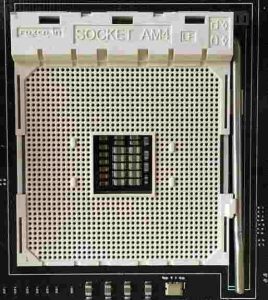 The best bargains of all for most computer users, who just want an excellent workstation, are the Ryzen processors that incorporate Radeon Vega graphic chips.

Have a look at their specifications. Here is an article that provides them:

According to AMD, the new Ryzen processors provide significant increases in performance and power efficiency over the first-generation CPUs.

The best reviews of the new CPUs are on YouTube. Here is a long example. There are many others.