My desktop PC runs Windows XP SP3 [the last Service Pack for Windows XP, but the problem could apply to Windows Vista/ 7/8.1/10 using the NTFS file system] and it is giving me loads of disk error messages. As it starts up, the Windows XP logo with its animated blue bar comes up as usual, but then a blue screen comes up that wants me to run chkdsk – the Windows XP [and Windows Vista/Windows 7/8.1/10] hard-drive diagnostic utility.

After that, a countdown begins and Chkdsk runs (1 of 3 tests). When it gets to 100%, it fills the screen with a repeated line saying: “Inserting an index entry into $0 of file 25”, which runs non-stop, so I have to shut the PC down. Then I restart it and choose the option that prevents Chkdsk from running, but I still get the error messages. However, I can close them and log on while closing any other error messages. The first error message is: “WINLOGON.EXE – corrupt file” and it is followed by “The file or directory \$Extend\$Objld is corrupt and unreadable. Please run the Chkdsk utility.” All of the other error messages name the same file, but have a different header. Is there a fix for this highly annoying problem, or does my PC need a new hard disk drive?

Note that after I created a dual-boot Windows XP/Windows 10 system, whenever I used Win10 and then used WinXP, chkdsk in WinXP ran at startup wanting to fix plenty of errors. I chose not to run chkdsk, but it kept wanting to run, so I let it go through all of its tests. It removed plenty of corrupt entries. After that WinXP could start up normally, but every time I used Win10, the same situation occurred, so Win10 must have been using the hard drive in ways that corrupted entries in the NTFS file system for WinXP.

The $Extend\$Objld is a meta-data file; a special hidden file that the NTFS file system uses to store file-system information. (The NTFS file system is the one that Windows XP/Vista/7 uses.) For those of you who might be interested in the technical details, it is found in position 24 or 25 of the boot hard disk drive’s Master File Table and contains an index to the unique object identifier numbers that NTFS allocates to every file on the computer. The index is not essential, because Windows can still be used with the alternative FAT32 file system, but if the hard disk drive’s C: (boot) drive/partition has been formatted to use the NTFS file system, there is no way that it can be turned off.

$Extend\$Objld contains an index to every file on the drive, so it is large. If it is damaged, it usually takes Windows Chkdsk a long time to rebuild it – perhaps 12 hours or more of “inserting an index entry into index $0 of file 25”. As you have discovered, you can wait for it to complete its task or choose to interrupt it. If you interrupt it, it will run again when the computer is restarted. You can, of course, press the key that prevents the disk check again.

The computer runs properly without the $Extend\$Objld file and you can use the chkntfs /X command at the Command Prompt to prevent Windows from running Chkdsk at startup. To do that, gain access to the Start => Run box and enter cmd to bring up the Command Prompt and enter that command. Note that disabling chkdsk is not advisable, because it could lead to serious disk corruption.

To find out what the command switches are for any command, press the Windows key (it has a flag on it) plus the R key and enter cmd in the Run box that comes up. This command presents all of the switches for the chkdsk command – chkdsk /? The /? at the end of every command presents its switches. The chkdsk switches are shown in the image below. The chkntfs /? command brings up the switches for the chkntfs command. 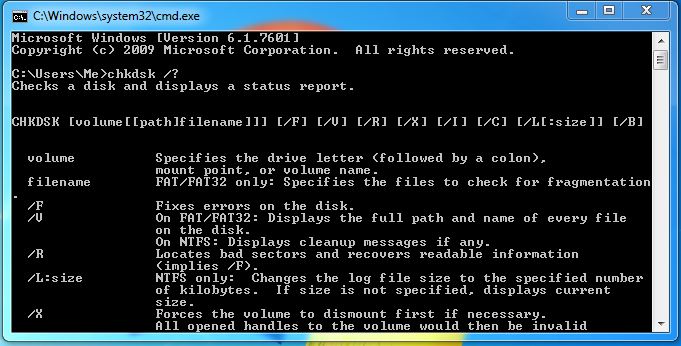 The switches of the chkdsk command brought up by entering chkdsk /? at the Command Prompt

The initial corruption of the $Extend\$Objld file could have been brought about by a power interruption while the NTFS file system was updating the file, or it could be a sign of impending hard-disk-drive failure.

The measures you can take to discover the cause of the problem are:

Download the diagnostic utility that the PC’s hard-drive manufacturer provides from its website, and use it to perform a complete test of the drive. If you don’t know the make/model of the drive, in Windows XP, open the Device Manager by entering devmgmt.msc in the Start => Run box and open Disk drives. (In Windows Vista, it’s the Start => Start Search box and in Windows 7/10 it’s the Start => Search… box.) You can then enter the make/model number as the search query in a web-search engine to locate the manufacturer’s website. If the Windows standard device drivers are being used, you can find out the make/model without opening the case and removing the drive by using the Belarc Advisor, which creates an analysis of the hardware and software on a personal computer. Look under FREE DOWNLOAD on belarc.com.

The links below provide information on where to download the hard-disk-drive diagnostic utilities for a particular major make of hard disk drive. Chkdsk is built into Windows.

MHDD is the most popular freeware program for low-level hard-disk-drive diagnostics. –

Note that Maxtor and Quantum hard drives use SeaTools (above).

Note well that if such a utility is used on a faulty system (suffering from bad RAM memory, an inadequate power supply unit, a faulty motherboard, etc.) it could produce unreliable results.

Note that some hard disk drives – certain makes of laptop/notebook PC hard-drives in particular – can suffer from random lockups, or develop areas of the drive that become slow for the drive to access. Those areas of the drive may not be revealed by the diagnostics utility provided by the drive’s manufacturer. However, they can often be detected by MHDD, which is a free diagnostic utility from http://hddguru.com/.

It is possible that the $Extend\$Objld file can become so fragmented that updating it can take a long time. This will usually only happen if some of the drive’s sectors are very slow to access, which itself suggests that the drive is suffering from physical problems. Problems can be caused if the computer is shut down before the updating has finished. The Windows Disk Defragmenter (Defrag) cannot defragment the file because of its special system status. It won’t defragment a system file. Nor can third-party defragmentation utilities, such as PageDefrag that can even defragment the Windows XP/Vista/7 swap file/paging file, defragment it.

If the diagnostic utilities don’t discover any physical problems with the drive and the problem occurs repeatedly, the only possible solution is to reformat the entire partition of the drive. If you don’t know how to do that Hard Disk Drive, SSD and Flash Drive Management in Windows 7/8.1/10 on this website provides the relevant information.

If physical problems are detected, replace the hard drive as soon as possible. Create a  system backup and/or image with Windows Backup and Restore or a third-party tool, such as the free version of Macrium Reflect, and then restore it to the new hard drive.