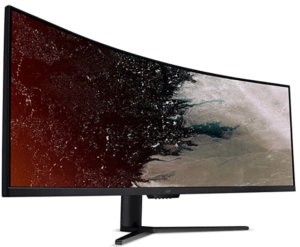 PC monitors have become wider compared to their height since flat-screen technology began advancing from around 2005 when the aspect ratio was a squarish 4:3.

In 2010, the arrival of widescreen monitors, with a 16:9 aspect ratio, brought the dimensions of a high-definition television (HDTV) to the PC monitor..

Note that the screen size of a PC monitor is the measure diagonally across the screen from e top corner to a bottom corner on the opposite side of the screen. Most ultrawide monitors have screen sizes of 34, 43, or 49 inches. The larger the screen size, the more windows you can display. See the video below that instructs on how to use the free Microsoft PowerToys to split up the screen to show different windows in various combinations.

Aspect ratio is the ratio between a monitor’s width and height. The two most common ultrawide aspect ratios are 21:9 and 32:9,  Alternative  names for the 32.9 aspect ratio are  “super wide” or “super ultra-wide”. The 21:9 aspect ratio handles movies and TV video wonderfully well. There is enough space to have Photoshop open on one half of the screen and a spreadsheet open on the other side. The first arrival of 21:9 monitors was in 2012 and the first arrival of 32:9 displays was in 2017.

Here are the main specifications of the Acer Nitro ultrawide monitor shown at the top of this page.:

What you need to know about PC/computer monitors –

Using an ultrawide monitor with the free Microsoft PowerToys tool