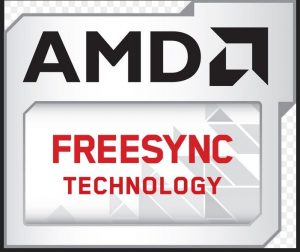 Gaming monitors support one or both of the two sync technologies – AMD’s FreeSync/FreeSync 2 or NVIDIA’s G-Sync – that are essential for the production of a tear-free, smooth flow of images at frame-per-second rates under 100 fps. At 100 fps and over, tearing is almost impossible to see without the use of monitor adaptive sync technology.  Therefore, the more fps the graphics card can sustain at a monitor’s native screen resolution, the better the visual experience when playing the most demanding games.

Note that while monitors can support both adaptive sync technologies, graphics cards can only support G-Sync or Free-Sync, not both.

The expectation in testing was that the more expensive G-Sync monitor would win the tests. Here is the conclusion of the testing done by Tom’s Hardware.- “Our testing of the AOC Agon AG241QG and AG241QX proved that theory wrong. Obviously, the FreeSync-based QX is superior in every way except for its maximum refresh rate. But why would one give up contrast and spend an extra $300 just to gain 21Hz that you can’t actually see when playing? Clearly, the AG241QX is the better choice.”

If a PC’s graphics card sends images to the monitor that are out of sync with the monitor’s refresh rate, the flow of the images is not smooth.This problem is independent of the refresh rates (frequencies) of the monitors, measured in Hz, when the refresh rate is under 100Hz  (100 frames per second).

In 2014, to overcome the problem, NVIDIA introduced its G-Sync technology that renders the images only at the beginning of the monitor’s refresh cycle by using monitors with variable instead of fixed refresh rates (frequencies). FreeSync (2015) and Freesync 2 (2017) are AMD’s solution. Those two technologies vary the refresh rate in real time so that an incomplete image never appears on the screen.  Monitor manufacturers are selling different versions of the same monitor that supports either G-Sync or FreeSync. The model’s online specifications should provide that support information.

“The Asus ROG Swift 360 monitor, developed – as you might glean – in partnership with Asus, is being showcased this week at CES 2020. At the heart of it is Nvidia’s improved G-sync technology, which debuted in 2013 but has been iteratively built on since then and has now, according to the company, breached the 360Hz mark.”

Of course, AMD had to come up with its own adaptive sync technology. Made available in 2015, FreeSync, which is free, is part of the DisplayPort graphics standard. FreeSync 2 HDR (2017) requires DisplayPort 1.4 to achieve full implementation. FreeSync is also available over HDMI.

A monitor manufacturer just has to implement FreeSync via firmware on DisplayPort 1.2a or HDMI. A monitor with special built-in components, as is the case with G-Sync, is not necessary, just a monitor that supports the activation of FreeSync technology and acceptance of its free firmware updates.

The first version of G-Sync was an unpractical monitor add-on kit costing $200. The G-Sync components are now built into specific gaming monitors, which can make them significantly more expensive than FreeSync monitors.

How to Run G-Sync On A FreeSync Monitor –