As already stated, the  BIOS component in a computer stores the hardware configurations that are needed to configure the system at start-up so that its hardware (and thus its software) can run. Standard and UEFI BIOSes are also capable of monitoring motherboard activities such as the processor’s temperature, the processor’s fan speed, and the voltages.

Being more difficult to keep cool, laptop processors are designed to run at much higher maximum temperatures than desktop PC processors – usually up to 100 degrees centigrade. In most cases, the user needs only to enable the setting called something like optimised default settings. Only users who want to put the computer to high-performance use customise the UEFI/BIOS settings.

The image below shows some of the available controls that is provided by a particular AWARD BIOS. Note that the UEFI/BIOS settings vary from one type to another. Some motherboards are designed to provide overclocking of the processor and RAM memory mainly via BIOS settings. Standard desktop and laptop PCs may or may not provide plenty of BIOS settings. Laptop PCs that are not designed for playing the latest PC games tend to have few settings in their BIOSes. Gamers like to optimise settings to obtain maximum performance, including overclocking, so gaming desktop and laptop PCs provide the BIOS settings that make doing that possible.

Click on the image below to view a larger version. 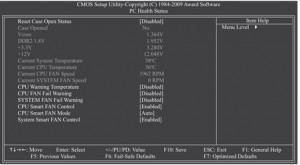 PC Health Status page of a standard Award BIOS showing its warning and control settings. Click on the image to view its full size 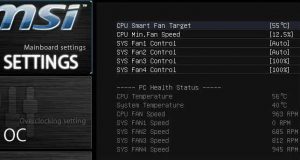 The fan control settings that an MSI motherboard’s UEFI BIOS provides. Click on the image to view its full size

The BIOS also supports software, such as a particular operating system. For instance, a BIOS update may be required before a computer with a BIOS created to run with Windows XP can be run with Windows 7. That said, all of the desktop and laptop computers that I have that are still in use dating from Windows XP did not require a BIOS update when the computer was upgraded to Windows 7 and 8/8.1.

See the image below of a start-up screen indicating at the top of the window that the system is configured by a standard (non-UEFI) Award BIOS. Click on it to see a larger version. The BIOS has not recognised the system’s AMD Athlon XP 2600+ (Main Processor), reporting “Unknown CPU Type” because it was released after the BIOS was created. The BIOS will have to be updated by reflashing it with a BIOS file programmed to recognise the new processor.

A UEFI BIOS would also have to be updated to recognise new hardware that it hasn’t been programmed to recognise. Unless the update is done by a tool created by the computer’s motherboard manufacturer that installed in Windows, a USB flash drive is used to update a BIOS now that no new computers have floppy disk drives. Here is a tutorial in PDF-document form by MSI on how to update a UEFI BIOS. There are also YouTube videos available on this topic.

Page 8 – The BIOS and overclocking