Recover and repair and upgrade a laptop PC

Ultra-portable laptops have very few output ports. Fortunately, docking stations are available that add what is missing. I won’t name the one shown in the image below because it is no longer available. If you want to buy one, web-search for laptop docking stations. The model shown below ($120 when it was available – a typical price for such a docking station) provides three USB 3 ports, a dedicated 10W charging port and a Gigabit Ethernet network port. 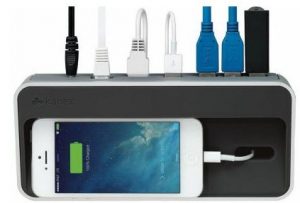 The keyboard of a laptop PC is usually the first component to become faulty. Fortunately, most brand-name laptop keyboards are relatively easy to buy new online and install.

A few of the keys of my MSI M662 laptop that runs Windows XP and Windows 10 in a dual-boot system started to malfunction. Namely, the a, w, s and 2 keys. They would work sometimes and not work at other times, making entering user names and passwords a hit or miss affair – a major hassle if you are only allowed to enter a password a few times before having to reset it. So, I used a wireless keyboard, which made entering information difficult if it had to be read from documents.

I knew that keyboards could be replaced if a replacement for a particular model of laptop was available. My laptop dates back to 2007, so I thought that if I could find one it would probably have to be second-hand. To my surprise, many sites had a new UK-layout keyboard for the MSI M662, but they were relatively expensive at around $58, so I searched eBay, which had plenty of cheap new UK keyboards from Hong Kong available. I ordered and paid only £12 for one on a Sunday and received it on the following Tuesday.

Quite a few MSI laptops use the same keyboard, so I was able to find a YouTube video that showed how to remove and replace one. I just had to remove the bezel above the keyboard by prizing it out, remove five screws, remove the keyboard, detach its ribbon cable by pulling the socket-device keeping it in place out slightly and install the new one by doing the reverse – pushing the data cable into its socket and pushing the cable-securer built into the socket in. Then I just had to push the keyboard into place, screw it in and replace the bezel. Thankfully, it was fully functional.

Now I intend to buy a new bigger hard disk drive (a crucial.com SSD-drive test and said that it did not support one), make a system image of Windows XP/Win10 and restore it to the new drive.

How to replace or remove keyboard in notebook MSI GX740 –

Other Laptop hardware that can be replaced or upgraded

Apart from the keyboard, the cooling fan(s), the RAM memory, hard disk drive or SSD and the CD/DVD drive of a laptop can be replaced or upgraded. The screen, installed in a laptop’s lid, can also be replaced fairly easily if replacements are available. The web-search query laptop screens provides plenty of links to the sites of sellers. Try adding the make/model to it for a more exact search. There are plenty of YouTube videos on how to do these replacements or upgrades, many of them for specific makes/models. Note that if any of the area of the lid containing the screen around the hinges get broken you need a new lid, not a screen. The hinges themselves rarely break, but if one or both do, the only way to get that fixed is to send the laptop back to its manufacturer.

If the built-in Wi-Fi adapter fails, it can be replaced with an inexpensive USB Wi-Fi dongle.

You should use the crucial.com site to find out which memory and SSD upgrades are available. It provides a memory and SSD System Scanner and a lookup – Advisor tool – that uses the make/model of laptop chosen from drop-down menus. Kingston.com provides a similar service.

An IDE PATA hard drive can only be replaced or upgraded by another IDE drive, because SSDs use the SATA interface, which are not compatible with each other. Not all laptops that have SATA hard drives can be upgraded to an (SATA) SSD, so you should run the System Scanner to make sure before buying one. When the free Belarc Advisor tool is installed, it can can be made to scan the PC to provide information on its hardware and software. It gave me the make and model of my elderly laptop’s hard drive, which I used to do a web-search to find out if it was an IDE or SATA drive. You cannot replace an IDE hard drive with an SATA hard drive – and vice versa – because the cabling is different. A laptop would have to be old to be using an IDE hard drive. I have a laptop that is 9 years old that has an SATA hard drive that the Crucial SSD System scanner said cannot be upgraded to an SSD, so I bought an Hitachi 500GB hard drive to replace its original 100GB drive. A more recent laptop would probably be able to take an SSD.

Some of the more expensive laptops allow the processor and discrete graphics card to be upgraded or replaced. The laptop’s user manual should provide information on which components can be upgraded.

Recovering and repairing a laptop

When a laptop’s software is responsible for giving it problems, they are just as recoverable as the problems of desktop PCs. The recovery procedures depend on what has gone wrong. That said, there are problems that are specific to laptops, some of which are dealt with on the Laptop Problems section of this website. The Software Problems and Windows 7/8.1/10 Problems sections can also provide solutions to laptop software problems. The best way to find out if your laptop’s problem is dealt with here is to use the most suitable search query in this site’s Search box.

Problems with the faulty hardware of a laptop are usually but not always more difficult to put right than similar problems of a desktop PC, mainly due to the fact that a desktop’s hardware is easily available and can be swapped with hardware suspected of being the cause of a problem. If, say, you have two desktop PC’s of a similar age, you can borrow the working parts of one and install them in the other. If the desktop PC works using a replacement component, the problem is solved. You just have to buy a new component, which are readily available from retail and online stores. Unfortunately, that procedure will only succeed with a laptop when its components can be swapped with other known working components. Most laptops only allow the hard-disk/SSD drive, the optical CD/DVD drive and the RAM memory to be removed. Removing anything else, such as the processor, which is usually soldered on to the motherboard, or the motherboard itself, should be left to qualified technicians. Anyhow, the processors that a particular make/model of laptop supports and the motherboard are usually only available new from the laptop’s manufacturer, not from stores. You might be able to buy a damaged laptop being sold for its parts on an auction site.

I have just had a look on eBay for parts for my 9-year-old MSI M662 laptop and there are secondhand motherboards, CD-DVD drives, keyboards, chargers, Wi-Fi cards, new and used batteries and other parts. That said, Eli the repair guy, in the YouTube video linked to below, advises people not to go to eBay for laptop parts because they often don’t work, are not the correct parts and often require other parts that are not provided. He advises using the manufacturer or a reputable laptop-component store. However, the older the laptop is, the less likely that new parts will be available.

Most laptop owners will take their machines to a service-and-repair shop for hardware faults. Many laptops are designed to be worked on easily, but others, such as the very thin ultra-portable models, are so complex that only trained technicians know how to open them up and effect hardware repairs or upgrades. Many brand-name laptop manufacturers, such as Dell and HP, provide service manuals for their machines online. Below is a link to a good long video on doing your own laptop repairs and upgrades. Eli goes through all of the repairs and upgrades that can be achieved with most laptops. The keyboard replacement he does was more difficult than it is for most laptops, which I have already described for mine and provided a video for, but it can be even more difficult, depending on how the laptop has been designed.

Always remember to disconnect the laptop from the mains and remove the battery before you do any work.

A laptop has to be kept physically clean because its cooling fan(s) get clogged with dust and draw dust into  ventilation air duct(s) that get blocked if not cleaned from time to time. It is also a good idea to give a laptop a performance boost by uninstalling unwanted software and apps and disabling unnecessary startup programs and services that load at startup.

Here are some links to webpages that provide useful information on how to achieve those aims:

NEXT PAGE – Does a home insurance policy cover a laptop?