Note that all AMD’s and Nvidia’s high-end graphics cards are now double-slot cards that are twice as thick as a single-slot card, which means that although installed in only one slot, they require the space of two PCI Express slots.

Also note that if you have a small case, you should measure the space available to a particular graphics card before buying it. The specifications of all graphics cards, including their length and height, are provided from the manufacturer’s website. If a card’s length or height exceeds the available space, it cannot be installed. Low-profile cards, designed for small cases, have half the height of standard-sized cards.

Also note that all the most powerful high-end graphics cards require one or more 6-pin or 8-pin PCI Express power connectors provided by the power supply unit as an auxiliary source of power. Standard Molex power connectors on a power supply unit (PSU) can be adapted to the 6-pin and 8-pin power connectors by using an adapter cable costing around £3 or less. You can now buy and adapter that uses two Molex connectors to produce a single 8-pin PCI Express power adapter. Web-search: “Dual Molex LP4 4 pin to 8 pin PCI-E Express Converter Adapter Power Cable” – only 99p on Amazon in the UK.

If a particular power supply unit doesn’t have the required number of PCI Express connectors, it’s possible to buy an adapter that is fitted to a standard Molex power connector that changes it into one.

The image shown below of a PCI Express AMD Radeon HD 6450 graphics card has digital DVI-D (right), DisplayPort (middle) and analog VGA (blue, left) output ports. A DVI-D output port can use a DVI-to-HDMI converter for 3D display over an HDMI 1.4a connection, which all new HD TVs provide. You’ll note that a DVI-D port shown below in the image of an AMD Radeon HD 6950 graphics card does not have the four extra analog VGA pins provided by a DVI-I port (shown in the image of the face plate of a graphics card with a white DVI-I port immediately below it) that can connect it to a monitor’s VGA input port via a supporting cable. 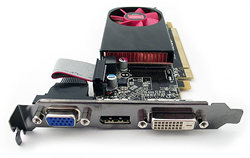 Close up of the DVI-I (left) and blue D-sub VGA ports on a video/graphics card. The block of four extra pins on the DVI-I port enable it to be connected to a VGA monitor

The full-sized and Mini variation of DisplayPort is growing in popularity as a means of connecting high-resolution monitors to desktop and laptop PCs.

An HDMI port on a graphics card, TV or monitor can also be connected to a DisplayPort on a graphics card, TV or monitor by making use of an all-in-one HDMI-to-DisplayPort cable. The digital HDMI standard carries sound and audio for modern PC monitors, TVs and home amplifiers. It can be converted to DVI with a suitable adapter cable, but with the loss of sound, which can be made good by connecting the device to the PC’s sound card with a suitable connection cable.

In July 2011, the company responsible for governing the HDMI standard decreed that adapter cables for converting an HDMI port to a Mini DisplayPort are not covered under existing licences and therefore must not be sold. Fortunately, it is still legal to use a dongle that accepts an HDMI cable as an input which has a DisplayPort connector. This means that instead of using a single cable, two cables are required to achieve the same connection – an HDMI cable and the dongle. Heads obviously need smashing together over this silliness. If you want to connect an HDMI port to a DisplayPort with a single cable, you’ll have to buy one while they are still available.

NEXT PAGE – The HDMI sound and vision transmission standard, its digital rights management system and other matters of interest