To use a motherboard’s or a processor’s integrated graphics chip requires the motherboard to provide the graphics ports that matches the monitor or monitors graphics ports, which are now VGA (analog), and digital DVI, HDMI and DisplayPort input ports. Inexpensive adapters make it possible to use one standard with another, such as a VGA port on a laptop with a DVI-I (analog and digital) or DVI-D (digital only) port on the monitor.

Note that a VGA D-Sub connection only provides video, not sound. Sound is provided by a connection to speakers or a PC monitor with built-in speakers from a sound card or onboard sound chip on the PC’s motherboard. A DVI connection can only provide sound if the DVI cable is connected to a DVI-to-HDMI converter that is connected to an HDMI cable that is connected to an HDMI port on the monitor. An HDMI-to-HDMI connection provides video and sound via an HDMI cable between a graphics card or onboard motherboard chip and a monitor. Note that the cheap HDMI cables work just as well as the expensive ones. Amazon is a good vendor of good, cheap HDMI cables of varying lengths. To connect a PC to a monitor with HDMI ports on the graphics card and monitor needs to be at least a metre in length, depending, of course, on how far away the monitor is from the graphics card.

A single-link DVI cable can handle screen resolutions up to 1920X1200 pixels, but a dual-link cable is required for screen resolutions above that up to 2560×1600 pixels, which makes DVI the most complicated graphics standard by far. DVI can be converted to HDMI or DisplayPort (the DisplayPort graphics standard was designed to replace the analog VGA and digital DVI standards).

HDMI is an cabled interface used to transmit video and audio from a source device – DVD player/drive – desktop/laptop computer – tablet – smartphone – game console – to a display monitor or TV. Or from a TV to another device, such as an audio system.

The Wikipedia page an HDMI give up-to-date information on the interface, such as HDMI Alternate Mode for USB Type-C.

Note that cheap HDMI extension cables are available if there is a long distance between the source device and a TV/monitor or vice versa. “HDMI Ethernet Channel – Adds high-speed networking to an HDMI link, allowing users to take full advantage of their IP-enabled devices without a separate Ethernet cable. Audio Return Channel – Allows an HDMI-connected TV with a built-in tuner to send audio data “upstream” to a surround audio system, eliminating the need for a separate audio cable.” Search for HDMI Extension Cables on Amazon to find out what is available. In my experience, the inexpensive AmazonBasics cables are just as good as the expensive cables.

Wikipedia: “HDMI 2.1 was officially announced by the HDMI Forum on January 4, 2017, and was released on November 28, 2017. It adds support for higher resolutions and higher refresh rates, including 4K 120 Hz and 8K 120 Hz. HDMI 2.1 also introduces a new HDMI cable category called Ultra High Speed (referred to as 48G during development), which certifies cables at the new higher speeds that these formats require. Ultra High Speed HDMI cables are backwards compatible with older HDMI devices, and older cables are compatible with new HDMI 2.1 devices, though the full 48 Gbit/s bandwidth is not possible without the new cables.” 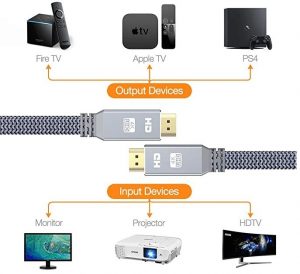 HDMI 2.0 4K cable and the devices that it connects. Click on the image to view its full size

The image below of an AMD Radeon HD 6950 graphics card shows, from left to right, its two mini DisplayPorts and one HDMI port and its two DVI-I ports that allow it to be connected to either a VGA or a DVI monitor using the correct converter cable.

Note well that both of the graphics cards shown below (Radeon HD 6950 & 6990) use a single PCI Express x16 slot on the motherboard, but take up the space of two slots, so you have to make sure that the PC’s motherboard has a PCI-E x16 slot and enough slots for your other adapter cards, because you won’t be able to use the slot next to the slot that the graphics card is installed in.

The highest-end (in March 2011) and very expensive AMD Radeon HD 6990 graphics card shown below only has four DisplayPorts and a single DVI-I port, but DisplayPort-to-DVI adapters are supplied for the DisplayPorts.

Monitors that use the USB interface are now available. The following article (August 30, 2011) deals with DisplayLink’s technology that provides adapters that enable monitors with VGA, DVI, HDMI or USB input ports to be connected by a USB port on the desktop or laptop computer. You can also use a USB hub/dock to connect multiple monitors that use USB graphics adapters. The KUPA USB graphics adapters reviewed in the video below can be daisy-chained and support VGA, DVI and HDMI monitors via a USB port on the controlling computer.

Most new laptops only provide a single USB-C port. Therefore if you want to use USB-C for multiple monitors, the best way is to use a dock (docking station) that connects to the USB-C port and provides connection to all of the graphics’ connection standards – HDMI, DVI, DisplayPort, VGA. See the video below on a USB-C Triple Dock.

You can also buy USB monitors.

There are many different  types and styles of USB monitor available. Here is a link to an affordable 15.6-inch portable model made by Asus: https://www.asus.com/uk/Monitors/MB168B/