How to identify a PC’s multi-core processor

The Core Speed is the frequency at which each of the cores operates at, which in the image is 4197.52 MHz, which is 4.197GHz. To find out information of any of the terms the CPU-Z tool uses, use them as a web-search query with cpu in front of each of them, such as cpu bus speed, cpu multiplier, etc. These days, I choose a processor by going on the number of cores, Core Speed, price, and purchaser reviews. I don’t play the latest PC games, so I don’t need the best performance by the processor and graphics card. 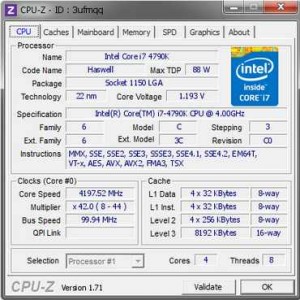 CPU-Z – free tool that provides information on the CPU and its caches, motherboard, memory and graphics. Click on the image to see its full size

Another good utility used for processor identification is the free WCPUID utility, which is made available from several download sites, such as Softpedia.