An introduction to the processors (CPUs) made by  Intel and AMD 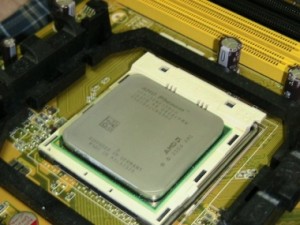 AMD Phenom quad-core processor in its motherboard socket. Click the image to view its full size

Identify the hardware and software installed on a computer

If you need information on what is installed on a computer, the Belarc Advisor from belarc.com is a free tool (look under Free Download on its website) that identifies a Windows computer’s hardware (processor, motherboard, graphics card, hard disk drive(s), DVD drive, etc.) and software (version of Windows, applications, etc.) and even software licences, including the Windows Product Key, the licence key that is always required when reinstalling Windows.

How to install a processor and its cooling unit

The Installing the processor (CPU) and its heatsink-and-fan or liquid-cooling unit page on the Build Your own PC section of this website provides that installation information.

Overheating is a common cause of automatic system shutdowns. The idle, temperature under a normal load and maximum temperatures are influenced by the cooling of the processor, the cooling of the case and the room temperature. The better the CPU cooler and the cooling of the case and the lower the room temperature, the lower the CPU temperature will be. The PC’s UEFI and standard BIOS setup program often provides fan-control settings that set the fan speed according to the CPU temperature. The higher the CPU temperature, the faster the CPU cooler’s fan spins. Below  is a link to an article on the acceptable temperature ranges of AMD and Intel desktop-PC processors. They tend to be much of a muchness for the listed CPUs and for older CPUs. For example, my old AMD Athlon 64 X2 3800+ CPU runs idle at 35 degrees C and at between 40 and 45 degrees C on a normal load, using a stock heatsink-and-fan cooler in a case that has a single 120mm fan in one of its side panels. The free version of Speccy is a very useful tool that provides system-specification information and system temperatures.

Another name for a computer’s processor is central processing unit (CPU). Installed in a printed circuit board (PCB) called a motherboard (also known as a mainboard), the processor processes the programmed software instructions of applications and tools/utilities, such as MS Office, Open Office, PaintShop, Belarc Advisor, malware scanners, drive partitioning and backup and restore tools, system cleaners, etc., according to the programmed instructions provided by the computer’s operating system, which is usually a version of Windows (Win7, Win8.1, Win10) or Linux or Apple’s Mac OS X. 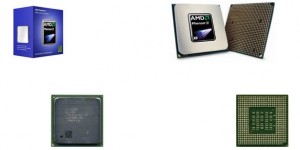 AMD processors – packaging and top and bottom views. Click on the image to see its full size

The image above of the AMD product shows from left to right, top to bottom, the retail packaging of a desktop-PC processor, an advertising image of the top and bottom of a Phenom II processor (you will never see the top looking like that, it’s shown like that for advertising purposes) and (below) what the top and bottom of an AMD processor really look like (all processors made by AMD or Intel are square and don’t get any bigger with additional cores, they just get slightly higher. An octa-core (8-core) AMD FX processor is a bit thicker than a dual-core or quad-core model.

The following webpage dates from 2012, but most of the information it provides is still valid and useful. I could not find a more up-to-date page. Since Google brought paid ads in at the top of its search results that look like free (organic) search results based on the quality of the site, the quality of information on the web has deteriorated, because the sites are not getting the numbers of visitors they need to make providing it a viable proposition.

Intel, AMD & ARM Processors – 2012 – “An overview of notebook and desktop processors offered by Intel and AMD, brief coverage given to ARM whose processors are found in tablets and smartphones.” –

If you are thinking of buying a desktop PC which has a particular make and model of processor, you can visit the following page that provides access to tables containing all of the technical specifications (number of cores, clock speed, supported instruction sets, cache, etc.) and other information, such as the dates of release, of all of the processors made by AMD and Intel up to the present. The further down a particular list a processor appears, the more recent it is.

Here are the two pages on Wikipedia that list all of the AMD and Intel processors, including laptop-computer processors, and their specifications, which includes the socket type:

This page provides a comparison of laptop/notebook PC processors:

The specification that indicates how many cores an Intel or AMD processor has is an X followed by the numbers of cores – X2, X3, X4, X6, X8. The specification could reach X16. The AMD FX range of processors, made available in October 2011, was the first to have a model with 8 cores.

In October 2011, AMD released the first 8-core (octa-core) processors for the desktop PC, which use AMD’s first all-new processor architecture since 2007 called Bulldozer. The new range of AMD processors, called FX, do not have an onboard graphics chip like AMD’s new A-Series Fusion APU processors for the desktop and laptop PC, all of which do. All of the FX processors have unlocked clock multipliers, which allow enthusiasts unrestricted overclocking from the stock default speed.

Officially, a new Socket AM3+ motherboard with an AMD 990FX chipset is required for the Bulldozer processors, which provide an unlocked clock multiplier, allowing for unrestricted overclocking (running processors and other components, such as the memory and graphics card, at higher speeds than their stock speed). However, some Socket AM3 motherboards will run FX processors with a BIOS update. Socket AM3, first made available in February 2009, was the previous socket for AMD’s processors, which don’t provide onboard graphics.

When buying components to self-build a PC, you must always make sure that they are all compatible with each other, starting with the motherboard and processor. AMD processors don’t run from the sockets designed for Intel processors and vice versa and a PC motherboard only has one processor socket for supported AMD or Intel processors. Moreover, the type of socket, say an AMD AM3+ socket can only run the AMD processors designed to use it. An AMD Socket AM3+ processor, whatever its model name is, can’t be installed in the older AMD Socket AM1. The following webpage illustrates the kind of compatibility questions that surround the release of a new range of processor that runs in a new type of socket.

Questions of Compatibility: AMD, AM3, and Bulldozer –

NEXT PAGE – How to identify a PC’s multi-core processor