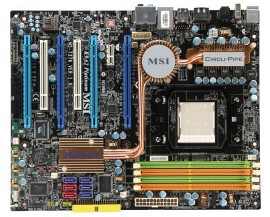 Most desktop PCs use processors, also known as CPUs, which stands for Central Processing Unit, are made by Intel or AMD. Both manufacturers use their own socket types.

The MSI motherboard, shown in the image above, has an Intel LGA775 socket for an Intel Socket LGA775 processor, which is no longer in use on new motherboards but can be used as an example because nothing much has changed since it was on sale. The sockets change their names frequently but what they do – house the processor – remains constant. Intel processors cannot be run from motherboards designed to run AMD processors and vice versa unless an adapter socket is available.

Download the User Manual for that Gigabyte motherboard yourself by clicking on the following link:

The following links to pages on Wikipedia provide full lists of desktop-PC and mobile (laptops) processors manufactured by Intel and AMD:

The following link goes to a webpage that provides all of the information on the processors used in desktop-PC processors from March 1993 to the current date, including release date, manufacturer, model, motherboard socket type, number of cores (processors housed in a single unit), frequency (speed), caches, maximum operating temperature, etc.

Here is the link that provides the same information on mobile (laptop) CPUs:

M.2 slot (bottom) on a Gigabyte motherboard. Click on the image to view its full size

Some motherboards come with a M.2 (m-dot-2) slot. There is too much to know about this motherboard slot to put it on this page, so a good link is provided below instead. At some point I will write my own page on it. The main use of the slot is to provide a slot for an M.2 SSD card.. Wi-Fi cards are also available. Both SATA and NVMe (PCIe 3.0 and 4.0) SSDs are available, but note that the M.2 NVMe drives are four and more times faster than the fastest SATA SSD. Therefore, the best choice for any system is an M.2 NVMe SSD.

The following forum threads deal with the M.2 slot and SSDs.

The image below shows an M.2 slot with an SSD card installed in it on an Asus AMD AM4 motherboard. Note that the M.2 slot has to support the SSD. M.2 slots can support both SATA and the very much faster PCIe  NVMe SSDs. You can’t just buy an SSD and use the slot to install it.  Download your  motherboard’s User Manual from its manufacturer’s website under Support for all of the technical information in detail. In order to cut costs, these days, most manufacturers do not provide a printed manual with their boards.

Here is the M.2 slot information taken from a user manual by MSI. 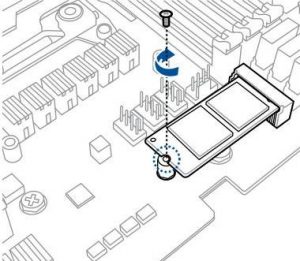 Understanding M.2, the interface that will speed up your next SSD –

Below are annotated images of an MSI 945GCM5-F (Intel Socket LGA775) motherboard and its ports panel that shows itself at the back of the case. This motherboard provides an onboard graphics chip, hence the blue analog VGA graphics/video output port. If you want to attach this motherboard to a monitor that only has a digital DVI graphics/video input port (no VGA port), you have to make use of a VGA-to-DVI analog adapter cable, which can be purchased for less than £10/$20. The LGA775 FSB 1066/1333 MHz socket houses the processor. 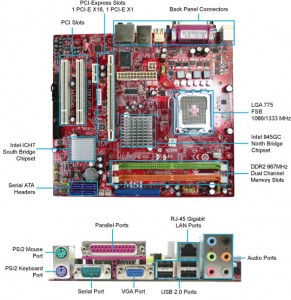 Annotated images of a Socket LGA775 ATX motherboard and its ports panel. Click on the image to view its full-size

Note that some motherboards now have integrated graphics and provide a standard analog VGA and a digital DVI port and a digital DisplayPort graphics port on the ports panel, enabling the use of up to three monitors (one connected to each port). If there is an HDMI port on the motherboard, if a monitor has an HDMI port itself, it can also be used to display the graphics. (See the Video and Graphics Cards section of this website for detailed information on graphics ports.) The ports panel shown above only has an analog VGA port. The ports panel of the motherboard shown in the second image of a motherboard, below, does not have integrated graphics. A video/graphics card has to be used with it to provide the graphics capability.

The Serial and Parallel Ports on the motherboard image above, are legacy connectors mainly used for printers, scanners, joy sticks, etc., which have been replaced by the USB standard. The motherboard depicted above only has four USB 2.0 ports, but USB 3.0/3.1 is now available, also known as SuperSpeed USB, which most recent motherboards provide. The four Serial ATA Headers are SATA ports for hard-disk, SSD and CD/DVD drives that use that data-transfer standard.  The RJ-45 Gigabit LAN Port is the wired Ethernet network port that is connected to a router around which a network is built and an Internet connection made. The PCI (old technology) and PCI Express (current technology) slots on the board itself are used for adapter cards – graphics, sound, networking cards, etc. The two DDR2 Dual-Channel Memory slots are for the RAM memory modules. System memory is now up to DDR4, first made available in 2014. Most ATX motherboards provide four or more memory slots. If a motherboard only has two memory slots, its memory capacity will half of one that provides four slots running the same type of memory.

Most of the AMD Socket FM1 and Socket FM2+ motherboards that run AMD’s A-Series APU processors that themselves have an onboard graphics chip provide all four graphics ports – VGA, DisplayPort, DVI and HDMI outputs, as shown in the annotated image below of an Asus F1A75-V Pro Socket FM1 motherboard’s ports panel taken from its user manual. They can all be used to display the graphics output of the processor’s onboard graphics chip at the same time if the four monitors support one of the graphics output ports.

Note that this motherboard, shown in the image below, provides both USB 2. 0 and USB 3.0 ports. USB 3.0 (SuperSpeed USB) can only be utililised fully by external SSD drives, which can be used instead of a hard disk drive as the boot drive and for data storage. Internal SSD drives use the same SATA 3.0 standard as internal hard disk drives. The External SATA Port is for an external hard disk drive or CD/DVD optical drive. USB 2.0 is more than adequate for devices such as an external hard drive, external CD/DVD drive, keyboard and mouse, etc. USB 3.0 was first made available in November 2008, but its take-up has been slow, no doubt due to the fact that USB 2.0 is adequate for most USB devices. 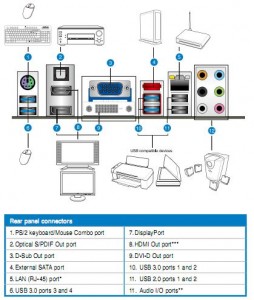 It shows its single HDMI port (below two USB 2.0 ports) that can provide high-definition graphics and sound output to an HD TV, games console, etc. Many motherboards now come with an integrated sound chip that provides sound of an acceptable quality via its analog mini-jack connectors, which support 5.1 surround sound via a set of five speakers and an inexpensive set of stereo speakers, making it unnecessary to have a sound card. A line-in jack to connect the PC to an amplifier and a microphone jack is usually provided. However, note that the motherboard must have a block containing 6 (two rows of 3) sound ports on its ports panel, as shown in the images immediately above and below. If only 3 sound ports are provided, as shown in the images of the MSI Socket 939 motherboard, below, 5.1 surround sound plus line-in and microphone input ports cannot be provided simultaneously, because they function by switching inputs for outputs, depending on whether the speaker configuration is set to 2.1 stereo of 5.1 surround sound. The MSI RS480M2-IL micro-ATX motherboard provides onboard graphics and sound chips making the use of separate adapter cards unnecessary.

The ports panel of an MSI RS480M2-IL motherboard. Click on the image to view its full-size

The Line-In port of the ports’ panel of an MSI 790GX-G65 motherboard is used for external CD player, tape player or other audio devices. Line-Out is a connector for speakers or headphones. The Mic port is a connector for a microphone. The three other output ports are for surround-sound speakers. – RS-Out (Rear-Surround-Out) in 4.1/ 5.1/ 7.1 channel mode. CS or SS-Out (Center/ Subwoofer Out) in 5.1/ 7.1 channel mode.

Visit the Sound section of this website for information on the different types of delivered sound.

Note that the motherboard user manuals for any current or previous processor socket type provide annotated drawings or images of the motherboards, naming the components and ports. If you don’t have the paper copy that comes with a boxed motherboard, all of the major motherboard manufacturers provide user manuals as downloads in the PDF document format from their websites. Visit the Processor Sockets section of this website for information on past (superseded) and current Intel and AMD socket types.

The following webpage provides a quick video guide to how to install a processor, its cooling unit and RAM memory on a motherboard and how to install the motherboard a tower desktop PC case. Before you install the components of a desktop PC into the case, you should always read the motherboard’s user manual, downloaded from its manufacturer’s website if you don’t have a paper copy. The following video guide does not provide information on aligning the processor the correct way around, which the user manual should illustrate and explain.

Upgrading A PC: Installing A Motherboard –

NEXT PAGE – The motherboard’s chipset – the north and south bridges