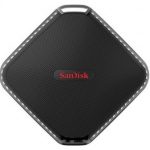 In June 2016, the SanDisk Extreme 500 Portable [external USB] SSD 240GB, priced at only £76, received very good reviews on Amazon. It is less than half the size of a smartphone and delivers up to 4 times the speed of an external hard drive. It is possible to run Windows and Apple’s OS X from it instead of from an internal hard disk drive. One purchaser reviewer used it to breath new life into an 2012 iMac. “Booting is a matter of a few seconds and application loading is virtually instantaneous.”

“Couple of caveats if you’re thinking about doing something similar.

1. SSDs over USB in OS X don’t support TRIM.
2. With an external drive it’s possible to inadvertently unplug it when your system is running which would be a Bad Thing.”

Many users are reporting external hard drives dying on them for no reason on the web. Their solution is to buy a HDD docking station for standard 2.5-inch and 3.5-inch SATA hard drives that allows them to be used as external drives that are no more likely to die than the standard hard drives that are used, which is not very likely.  Docking stations that provide support for the old IDE PATA standard (the forerunner to the current SATA standard) are also available, as are universal docking  stations that can turn a tablet into a laptop PC by providing all the ports that are required. Here is good example of an SATA docking station that was priced at £30 in July 2015:

If you run a business and you want a waterproof, fireproof, theft-proof external HDD or SSD to give a high level of physical protection to your data, they can be bought fairly inexpensively. Visit iosafe.com – one of the best manufacturers of protected drives- for more information. Rugged portable external drives are also available from that manufacturer. Here is an example:

Page 5 – Formatting and booting from a HDD (not an SSD) with a capacity exceeding 2.19TB