In order to install a particular make and model of processor in a motherboard, that motherboard and its BIOS setup program must support it. All of the recent and current processors made by Intel and AMD just have to be installed in a supporting motherboard that is properly installed in a PC’s case with the RAM memory and the video/graphics card installed in order to be able to boot into the BIOS by pressing its entry key when the startup screen appears.

The installation of a socketed processor is merely a matter of lifting the lever beside the Zero Insertion Force (ZIF) processor socket, inserting the processor into it the correct way round, according to the alignment instruction, and pressing the lever back into place. The socket’s lever in the image below is brown and it is located on the bottom side of the socket, which is held in place under a protrusion from the socket itself.

The two clipped corners of this Socket 370 socket (now a redundant socket type) are clearly seen in the bottom corners of the socket. An Intel Socket 370 processor’s pin grid array will match its shape. 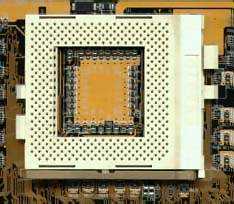 The clipped corner, seen on the images below of the front and bottom of an AMD Athlon 64 processor, is fitted to the matching corner of the processor socket on the motherboard. 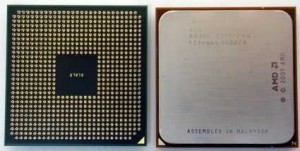 Top and bottom views of an AMD Athlon 64 processor

Note that if you bend a pin on the processor so that it doesn’t make a connection, you very probably won’t be able to start the computer. Also note that Intel’s latest processors do not have pins on the underside of the processor that fit into matching holes in the processor’s socket, they have contact points that match contact points in the socket.

There will always be an easy way to align a processor in its socket correctly, but there is no universal way to do so. Read the instructions that came with a boxed retail processor, or visit the manufacturer’s website for instructions if you have bought a bare, OEM product, or a second-hand processor that didn’t come with its supporting documentation.

You can download the manuals for the latest MSI motherboards free of charge from msi.com. The manuals provide illustrated instructions on how to install the processor in its socket. Each type of processor will have its own method of being correctly aligned in its socket. Instructions are also provided in the manual on how to install a heatsink and fan unit over the processor. All of the major motherboard manufacturers provide user manuals for their boards, and copies in the PDF format are also provided from the motherboard manufacturer’s website. Those instructions are also provided when you buy a retail, boxed processor.

The image below shows a heatsink and fan unit with the lever that is used to fit it to the processor socket.

There are various kinds of lever implementations used to make fitting the cooling unit easy. However, if you have never installed the type of processor and cooling unit, you should always visit the processor’s manufacturer’s site for illustrated instructions on how to install them, because doing so might require specific knowledge that is more than just common sense. YouTube is a good source of videos on installing PC components, often by make and model, including the processor.

Cooling units are available for Socket LGA775 and subsequent Intel processors that are fixed over the processor’s socket by pressing push pins into their sockets on the motherboard. The push pins have a flat top that makes doing this very easy. The coolers have four feet that clip into holes in the motherboard. On each foot of the cooler there is a slot and an arrow. You insert a flat-head screwdriver into the slot to engage and disengage the lock in order to install or remove the cooling unit. For example, to remove the cooler, insert the screwdriver into the slot and turn it 90° clockwise towards the arrow. Then, one at a time, grip each foot and pull it up. It should click up and come free. When all of the feet are free, lift the cooling unit straight up from the processor. Reverse this process to install the processor.

AMD’s Athlon 64 and Phenom ranges of 64-bit processors (the retail boxed product) and subsequent models come with a heatsink and fan unit and illustrated instructions on how to fit it. The process is similar to the method used to fit the cooling unit in the image above, except that there is no lever to push the hook over the protrusions on the socket. You hook one side of the unit over a single protrusion, and then pull a springed handle on the other side of the processor’s socket over until it locks into position with the top of its handle in a horizontal position.

The following page provides access to PDF files on how to apply Arctic Silver 5 thermal compound to Intel and AMD processors to make the connection between the CPU and the cooler as efficient at transferring heat as possible:

If you need to see how Intel and AMD processors are installed, view these videos:

Also shows how the motherboards’ UEFI BIOS is updated by installing a USB flash drive containing the update and pressing a button on the motherboard. When the light on the button flashes, the UEFI is updated.

Newegg Tutorial: How To Install an AMD CPU [processor] –

This video shows that you can use lighter fluid or something similar to remove old thermal paste left on the CPU and cooling unit if you want to use them in another computer or sell them. If you are removing an old CPU and cooler to install an upgrade to both, the new cooler will come with thermal paste that will be activated by removing a protective sticker. No pre-applied thermal paste/adhesive on the cooling unit will be left open to the air. Obviously, the sticker has to be removed before installing the cooler over the CPU.

You can search for a video using the make/model of processor that you want to install as the search query in YouTube.

There is no need to use an electro-static discharge (ESD) wrist strap. Just touch some metal that is not insulated from the ground, such as a the PC’s case.

There are too many different kinds of water-cooling solutions, so I am not going to provide installation information on them, which is usually more involved than installing a heatsink-and-fan unit. Before you buy one, do research on it by reading reviews on the manufacturers’ and sellers’ websites. For example, Amazon’s purchaser reviews are usually well worth reading. The unit itself will come with installation instructions. PC self-builders who overclock their PCs and want the best cooling due to the extra heat that overclocking produces use water-cooling, but for most people air-cooling is sufficient. Here is an example video:

A Beginner’s Guide to Water Cooling Your Computer-

To increase the thermal conduction efficiency between the processor’s die, and the surface of the heatsink, thermal paste (thermal compound) or thermal pads are used.

For Intel Pentium 4, Celeron, Core 2 Duo, Core 2 Quad, Core i7, Core i5 and Core i3 and AMD Athlon 64, Athlon 64 X2, and Phenom X2/X3/X4 processors, etc., which all have a covered upper surface, spread the paste thinly over the entire surface by squeezing a bit out and then spreading it evenly across the surface with an old credit/store card or similar implement.

When using thermal paste, care should be taken not to apply it too thickly. The paste should only expel the air from the interface between the cooler and the die. Using more paste than say an amount equivalent to two or three grains of rice usually reduces thermal conductivity instead of increasing it. Practical tests of the various pastes have shown that the temperature of the processor’s die can be reduced by up to three or four degrees Celsius (3 to 4 °C) by using a high-quality thermal paste.

The application of the pre-assembled thermal pads is quite simple – you remove the protective film from the pad, place the pad between the processor and cooling unit, finish fitting the cooler, and then turn the computer on.

A thermal pad can only be used once. It leaves sticky residues that are not easy to remove from the contact surfaces. Thermal paste is easier to remove, therefore, those of you who regularly change the processor are advised to use it instead of a pad.

You can conduct a web search to find websites that provide information on how to apply and remove thermal paste and the sticky residue left by thermal pads.

The search Query clean “thermal compound” processor (as is) lead me to these links:

How to Apply Thermal Compound to a CPU [Video] –

Arctic Silver Instructions [Including how to apply Artic Silver 5 thermal compound to Intel and AMD desktop and laptop PC processors and how to use other products made by the company. The instructions are in PDF documents that require a PDF reader, such as the free Foxit Reader.] – http://www.arcticsilver.com/instructions.htm

Arctic Silver is a leading manufacturer of thermal pastes.

Next page: How to install DDR/DDR2/DDR3/DDR4 RAM memory