You are here => Home => Hardware => Build Your Own PC/Computer

The following pages in this Build Your Own PC section of this website deal with how to install the motherboard, processor (CPU) and RAM memory and other useful self-build information related to those components.

Here is the link to the information page of this website that deals with the motherboard in detail:

The motherboard must support the make/model of processor chosen for the self-build or be made to do so with a BIOS update – and the memory must be compatible with the motherboard. Note that it is possible to buy the correct type of memory and still find that it is not compatible with the motherboard slots it is installed in. Some motherboards are compatible with almost any memory of the correct type while others are very finicky and will only work with compatible brands or memory, which are usually listed as such on the motherboard-manufacturer’s website.
When building your own desktop PC, choosing the make/model of motherboard (mainboard) is the most important choice, because it determines which make/models of processor (made by AMD or Intel) you can use, many of the supported features of the PC, such as the number of USB ports, networking, HDMI, and eSATA support, and how upgradable and customisable the PC is. Note that some BIOS or UEFI BIOS setup programs  used in motherboards allow much more user-customisation than others.

Visit the Motherboard – PC Cases (sub-menu) – Power Supplies (sub-menu) sections of this website under the Hardware menu at the top of each page for more detailed information on those most important of components.

Every boxed retail motherboard comes with a user manual, which must be read and consulted before and during the building process. Getting it before you buy the other components allows you to make them as compatible as possible. If you buy a second-hand motherboard, say, from eBay, and it doesn’t come with a manual, you just have to identify the make/model and then download a manual in the PDF format (requires a free PDF reader, such as the Foxit Reader made available on the web) from its manufacturer’s website.

The image below shows an ATX motherboard installed in an ATX PC midi-tower case standing as it would on a desktop, but with a side panel removed. 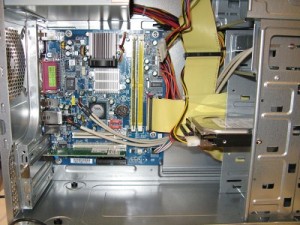 ATX motherboard and IDE hard disk drive installed inside an ATX PC case. Click on the image to see its full size.

There is a single IDE PATA hard disk drive (redundant technology) installed in the drive bay on the left. The current standard is SATA for which only the much thinner cables look different. SATA uses one cable per drive whereas the IDE PATA ribbon cable, shown above, can attach a master and a slave drive to each cable. The ports panel on the left side of the motherboard will show the ports, which fit through a matching ports panel, at the back of the case. There is a single adapter card installed in the bottom of the three white PCI slots, leaving the top two empty. The port(s) of that card will also appear at the back of the case. To install or remove this hard drive would involve either removing the other side panel of the case to access the two screws securing it on the other side of the bay or would involve removing the drive bay itself (not applicable to the case shown above) if the case has removable bays, which are usually removed by removing the front panel and then unclipping and sliding the bay out from the front of the case.

The image below shows a PC that uses SATA cables for the drives. There appears to be an IDE optical CD/DVD drive in the top bay connected to the motherboard by a flat IDE ribbon cable. 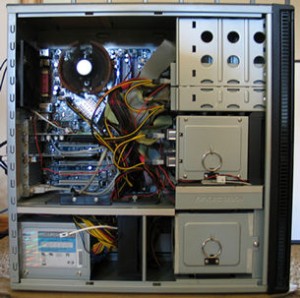 Visit the following page on this website to see images of annotated motherboards and ports panels.

Note well that if you are upgrading a system with new hardware components, you must make sure that the power supply unit (PSU) is capable of powering the new hardware, because hardware that is only a few years old might use much less power, and is much more tolerant of a slightly erratic supply of power than most of the latest hardware – graphics cards, RAM, processor, etc.

Remember not to place the motherboard on any kind of electricity-conducting material when you configure it, or install the processor, its cooling unit and the RAM modules. Always place it on insulating material such as the plastic or cardboard covering it came in. And always earth yourself by touching earthed metal such as a radiator before you touch electronic components, or wear an anti-static wrist strap that is attached to earthed metal.

Note that in a new case there will be thin metal blanking plates that seal the openings in the ports panel and the drive bays in the case. The removable blanking plates that cover the PCI/AGP/PCI Express openings for adapter cards can be removed by unscrewing the screw that holds them in place.

In cheaper cases, the ones that cover the drive bays at the front of the case are usually held in place by threads that can easily be punched out manually, or removed with the aid of pair of pliers, but take care when removing them because you can easily cut yourself on the sharp edges. They cannot usually be replaced when removed, but if you have a high-quality computer case, you can often remove and replace these blanking plates whenever you like.

Next page: How to install a motherboard in the case and choices of processor and cooling units