Most computer stores, retail or online, sell PC cases, but shop around before you buy, because the prices for the same goods can vary widely. Most of the hardware advertisers in a magazine such as Computer Shopper (Expert Reviews on the web), sell quality cases.

Websites such as overclockers.co.uk sell quality cases, motherboards, heatsink and fan units to cool the processor, etc. This company also sells overclocked hardware that requires quality power supplies and extra cooling, so it sells everything you need to build a PC that is as well suited to overclocking as possible. Similar companies exist in the US.

Below is an image of a CoolerMaster heatsink and fan unit for an 850MHz AMD Athlon 64 processor. You must purchase a cooling unit designed for a particular make and model of processor. Some cooling units have been designed so that they fit a wide variety of both Intel and AMD processors. If buying online, the seller’s information should provide the information about which socket types are supported. Otherwise, the CPU cooler’s retail packaging will provided that information. The manufacture’s website, if it has one, should do so as well. The cable is connected to a socket on the motherboard beside the processor. 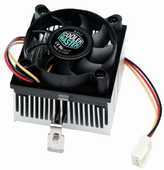 Intel and AMD processors bought as retail packaged products usually come with a thermal-paste applicator or a cooling unit that has a patch of thermal paste on the area that covers the processor that has to be uncovered before installation by removing a sticker. There is no standard way to install a cooling unit. The method is determined by the processor’s socket type on the motherboard. Every new retail packaged processor or motherboard comes with a user manual that provides instructions on how the provided cooler is installed on the motherboard’s socket. All of the major motherboard manufacturer’s provide manuals, usually in the PDF format, that can be downloaded from their websites.

The section of this article on on motherboards, processors and RAM memory provides more information on heatsink and fan units, thermal paste and thermal pads. There is a link to that section in the index of contents on the first page of this article.

Here is what someone had to say about using thermal paste in a purchaser-review of a heatsink and fan unit:

“The problem I encountered was that my temps were a little high, around 45C. But after some research, I found out that the thermal paste needs some time to “cure”, like set into place. After a couple days the temps dropped from 45C to 40C and now they’re around 33-38C degrees idle. The manufacturer who makes MX-4 (the thermal paste I used) say that it can take from 100-200 hours for the thermal paste to cure. So don’t start taking your computer apart straight away if you’re not getting the best temps. (It also depends on what kind of thermal paste you’re using, as MX-4 is quite a thick paste, whilst others may not need a lot of time to cure). Just be sure to use a good quality thermal paste if you want the best temps.”

If you don’t use the stock cooler that comes with a processor, you have to buy one that is designed for the make and model of the processor. It comes with installation instructions, but if you can’t make head or tail of them, try searching YouTube for a video showing how that make/model is installed. Viewing a bad video is much better than trying to follow poor instructions.

Intel Socket LGA775 processors are no longer manufactured, but they are still being used in millions of PCs. Intel still uses the same type of pushpin cooling units for its Socket LGA775 and later processors, so finding one is easy. The specifications of a particular cooler tell you which range of processors that it can be used with. Processors made by AMD and Intel use different methods of attaching the cooler to the motherboard, but, as mentioned earlier, it is possible to buy coolers that can be used with both Intel and AMD processors.

Note well that some heatsink & fan units can have some form of sticky heat transfer material on the underside of the heatsink, usually in the form of a small square that fits over the processor’s central core where the main processing chip is housed. This will help the heat to conduct away from the core to the heatsink so that the fan can dissipate the heat into the case. Since it is sticky, a thin protective plastic film will have to be removed prior to fitting the cooler to the processor. Failure to do so could cause the processor to overheat rapidly enough to destroy itself.

Water-cooled systems have been available for some time, but it is expensive compared to using the usual heatsink and fan coolers, which is perfectly adequate for most PC owners. But, just in case you feel like going down that route, here is an illustrated article on how to install a water-cooling system:

A Beginner’s Guide For WaterCooling Your PC –

Note that water-cooling systems are usually large, taking up plenty of space. Consequently you have to buy a case with sufficient space to install one. Such cases have been scarce since water-cooling devices first became available, no doubt because not many people use them. As might have been expected, since not many of them are sold, the cases capable of housing a water-cooling system are not cheap. The following article deals with the type of case that is required, ranging in price from £150 to a staggering £323:

And here is an article on hybrid coolers that are mixture of fan and water cooling:

You can also purchase additional fans to fit in a desktop ATX PC case The image below of a case fan is not of the same scale as the heatsink and fan unit shown above.

A case fan for an ATX PC case

If you want a computer that is a quiet as possible, fans of 120mm (12cm/4.72″) are recommended because they spin slowly compared to smaller fans and therefore don’t make as much noise. If you buy a case, find out the size of its case fan(s).

I have a case which has a transparent side that has a 100mm (10cm/3.93″) fan in its middle that has a blue LED light in each of its corners that cast blue light into the case. If I want to see if the processor’s fan is working, I just have to look into the case. The noise the fan makes is slight. The case rests on top of a computer desk. That side of the case faces the monitor, so it blows air across the desktop, which I find refreshing, even in winter.

If there isn’t a ready-made mounting position or opening, you may have to cut an opening in the case to fit a case fan, depending on how many fans are already in the case, or where in the case you want it.

Just make sure that you attach the plug to the motherboard connector the right way round. You don’t want the fan to spin in reverse and suck air into the computer when you want it to expel the air. You could have a fan at the front of the case that sucks air into the case, and a fan at the back of the case that expels it. What you don’t want is two fans in those positions both of which suck air into the case. The idea is to have cool air flowing over the components.