If the power supply unit (PSU) fails dramatically, it can take the rest of the components to the grave with it. A cheap power supply is more likely to produce a dramatic and expensive death scene and other power problems than one made by a manufacturer of quality units.

A cheap power supply is also likely to be large and come in a badly designed case that leaves little room for movement due to the size of the power supply and other deficiencies in its design. A power supply should be a small unit that is tucked away in the top corner of the case above the motherboard’s external ports, leaving access to the motherboard unhindered. It can also be located in the bottom corner at the back of the case.

If the power supply is faulty, it will be very difficult to prove that it is the source of your system’s problems. Unless you have and know how to use expensive diagnostic testing equipment, you will have to have another case that works with a full set of hardware components that do not work in that case with the faulty power supply installed in it.

Even if you know that the power supply is at fault, you are likely to experience severe problems putting the situation right.

For instance, I once purchased a case that had a faulty power supply, but because I didn’t return it within 14 days, it was sent to the company’s service centre for repair. After a month of hearing nothing, I had to deal with the service centre at the other end of England, because the branch in my town does not deal with repairs even though that was where I handed it in. The service centre found out that the courier given the job of returning it to me had failed to do so due to the driver putting a message under the security doors at the front of my block of flats. It was left in storage for two weeks. When I got it back it was in exactly the same non-working state. Two months after I purchased the case, I finally got a refund after writing to the CEO and threatening to post my story all over the web – indefinitely.

So, do yourselves a favour, purchase your case from a local computer store that will be able to test it locally, or provide you with a replacement if the power supply fails during its statutory twelve-month guarantee period.

The following link goes to a page containing a flow chart showing the steps to troubleshoot power-supply failure:

If it comes with one, a quality ATX case has a small, heavy power supply, which leaves plenty of room to install and work on the motherboard – and the hard disk drive(s) and CD/DVD drives can be slid out of their bays instead of having to unscrew and then remove them from a fixed bay – as is the case with most cheap cases. 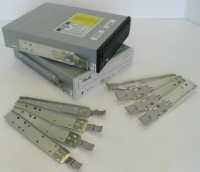 Hard disk and CD/DVD/Blu-ray drives can be housed in a single unit that slides out from the front of the case by removing the front panel of the case, which, when removed, allows two screws to be removed so that the side panels of the case can be slid out.

A CD or DVD or Blu-ray drive slides into a fixed bay on two rails fixed to both sides of the drive. The rails (shown in the image above) have clips on their ends that protrude out of the front of the case, thereby enabling the drive to be slid out of the front by disengaging the clips – in the same way as the whole bay for the disk drives can be removed from the front of the case, which makes installing or removing the drives very much easier than having to do so from fixed drive bays.

Next page: Some useful case and component cooling information