You are here => Home => Huge mainstream media bias against Trump 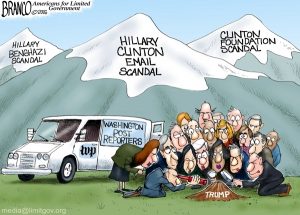 There is huge mainstream media bias against Trump.

You would have to be pretty dim not to realize that the corporate-owned mainstream and the social media in the UK and US are doing their damnedest to make it politically correct not to vote for Donald Trump while ignoring the huge amount of Hillary Clinton’s malfeasance that goes back more than three decades.

On September 4, 2016, Google was not prompting for Hillary Clinton’s health problems, as shown in the image below. This was not trending with the current issue about Clinton’s health. This means that although the information is available, the searcher has know what to search for instead of being prompted with popular search queries. The “Clinton body count” – the long list of mysterious deaths tied to  Bill and Hillary Clinton – is another search that does not produce prompts.

“Hillary Clinton health” Google search prompts do not include health problems. Click on the image to view its full size

The image below shows that Bing did prompt for Hillary Clinton’s health problems on September 4, 2016.

“Hillary Clinton health” Bing search prompts do not include health problems. Click on the image to view its full size

Try the search in Yahoo!, which came up with plenty of negative prompts after just the word Hillary was entered on the same date – health issues, illness, seizure, email scandal, etc.

Trump is dominating Facebook, Google+ and Twitter likes, streams, followers, subscriptions, etc., but they are doing whatever they can to stop the huge amount of negative content about Hillary Clinton from being accessed or trending. Here are the social media statistics related to Trump and Clinton.

The social media statistics related to Donald Trump and Hillary Clinton. Click on the image to view its full size

Here are some YouTube videos that provide information the mainstream media is going out of its way to ignore.

“Hillary Clinton hasn’t held a Press Conference in 256 days. Not since early October 2015! In Contrast, Donald Trump has held 41 since June 15th 2015 till 8/15/2016. That is a press conference every 6 days! Why has the Clinton campaign refused to talk to the press? Why have they refused to cover the new revelations on The Clinton Foundation? Why haven’t they covered email gate or the #dncleaks? Why have they refused to acknowledge her failing health? The answer is because 90% of the media is Hillary Clinton. They all have either been promised jobs, given favors and access for donations in pay-to-play schemes, or flat out are in bed with the Campaign as in married to or related to many of the Hillary Campaign staffers. In this week’s show I cover and expose all
these details.”