You are here => Home => What makes Windows crash or freeze?

How to find out what makes Windows crash or freeze – STOP error messages, etc. 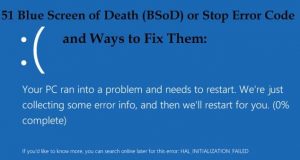 Of the many causes responsible for making Windows crash or freeze

There are so many causes responsible for making Windows crash or freeze on a regular basis that it is not possible to provide a single solution. Moreover, those causes can relate to software or hardware problems. For this reason, you have to narrow the problem down as far as possible to determine which course of action would be most likely to result in a fix. Of course, you have to be able to start Windows 7/8.1/10 up in Safe Mode or normal mode in order to diagnose what is causing a recurring Windows crash or freeze.

A STOP error message accompanied by a Blue Screen of Death (BSOD), shown in the image below, is the most common kind of crash that provides direct information about its cause.

Windows 7 STOP error message and BSOD – 7B. Click on the image to view its full size

For example, the STOP error 0x0000007B message suggests that the system is suffering from a problem with its hard disk drive, which is a hardware problem. However, STOP errors can also be caused by software that is not working properly, such as a program or tools that is misusing RAM memory.

A laptop of mine was suffering from the STOP 0x0000007E error message during operation. It reported what looked like a misuse of memory by the NNSStrm.sys driver file in the C:\Windows\system32\drivers directory/folder. I looked the file’s name up on the web and found a Panda Security forum page and other pages that said that the file is used by Panda Antivirus, which the laptop was using. I uninstalled Panda and the problem was fixed.

Windows Command Prompt window. Click on the image to view its full size

There is plenty of information on the web on every STOP error message. There are also search results, mainly ads, that say that they provide a fix. You should avoid trying to use any such ‘fix’, because they don’t work and could be malware.

You should also be aware that Windows is a highly complex operating system and Microsoft does not provide its source code to software developers. Therefore, developers have to develop their Windows software without knowing 100% how Windows works. This is why the interaction of so much different software with Windows is bound to cause Windows crashes and freezes, which may only occur rarely under specific circumstances. For example, when a particular web browser interacts with the Adobe Flash Player, both of which are constantly changing along with Windows. The same goes for Apple’s OS X (desktop/laptop) and iOS (mobile) operating systems. Only open-source operating systems, such as distributions of Linux, provide their source code to developers, which enables them to create better integration between the software and the operating system.

In the event of a complete hardware failure

If you cannot start up at all after a crash or use a boot disc to boot the system, a chronic hardware failure of some kind is responsible. The hardware that can cause a complete failure showing no signs of life are the motherboard and the RAM memory. If the hard disk or SSD drive or graphics card fail, the computer will show signs of life, producing an error message or BIOS beep code.

Use the Memory Diagnostics tool that is part of Windows to test the RAM memory. Faulty memory is a major source of Blue Screens of Death (BSoD) and system freezes.

The only way to fix hardware failures for the home user is to swap suspect components with known working alternative. If you don’t have alternative components, you’ll have to send the computer to a repair shop or to its manufacturer.

Use System Restore to roll back after installing problematic new software, update or driver

Note that if you installed software or a new driver just before the system crash problem started, uninstalling the new stuff will probably get rid of the problem. A quick way to restore the system to the way it was is restoring a restore point in System Restore that predated the problem. Note that you have to enable System Restore in Windows 10. You have to find and enable it. To find a link to it, enter its name in the Start => Search box.

If all of a computer’s hardware is working, you should be able to get into Safe Mode or boot into an alternative operating system. You can use System Restore and run your malware scanner in Safe Mode.

It is possible that malware is the cause of your Windows crashes and freezes. Malware can be the cause of almost any computer problem. Since Safe Mode uses the most basic drivers and system files, it is always best to run a scanner in Safe Mode, unhindered by the complexity of Windows in normal mode.

Alternative operating systems are distributions of Linux, such as Ubuntu or Linux Mint, that you install alongside Windows. Linux boots from its own boot menu that also adds Windows as a boot option. Those two versions of Linux can also boot the system from their boot discs. They function as if they were installed, including being able to go online using the Firefox web browser. A very handy diagnostic tool to have.

Switch to free Linux Mint to enjoy a fast, secure operating system that has all of the free software that most users need –

Here are two very different causes of a Windows crash. A laptop computer switches itself off due to overheating – it’s BIOS/UEFI settings and protective circuitry turn it off to avoid damage to its hardware. Or a desktop is shut down by Microsoft’s Enhanced Mitigation Experience Toolkit (EMET) – that users can install in Windows from WinXP to Win10 – because it detects that software is not behaving as it should.

Windows may or may not provide an error message that you can look up on the web for more information. For example, the image, above, shows a Windows crash error message produced by Windows 10. A Blue Screen of Death (BSoD) screen or a STOP error message might appear. This one says: “If you would like to know more, you can search online later for this error: HAL_INITIALIZATION_FAILED.”

The Reliability Monitor is available from Windows Vista to Windows 10. It is a user-friendly diagnostic tool that displays recent system and application crashes. It provides the kind of information that can indicate the source of problems.

Note that the Reliability Monitor uses the same event logs that the Event Viewer uses. Therefore, if you already know how to use the Event Viewer, you can use it to find out the cause of a Windows crash.

How to use Event Viewer to fix your Windows 10 computer –

The causes of RAM memory problems and how to diagnose, troubleshoot and fix them –