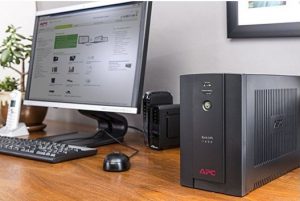 Laptop computers working from the mains electricity supply have a built-in solution to sudden short power outages – their battery, which kicks in as soon as a power outage occurs without losing any unsaved work.

Power outages are called blackouts and other names. A brownout is an intentional or unintentional drop in voltage in an electrical power supply system. Electrical spikes – power surges – are “fast, short-duration electrical transients in voltage (voltage spikes), current (current spikes), or transferred energy (energy spikes) in an electrical circuit [mains supply].” – More voltage or current is pushed through the circuit than is normal. Power surges can destroy electrical devices.

What Is an Electrical Power Surge? –

Power outages likely to become more common in most countries

Unfortunately, power outages are becoming more frequent where I live. That state of affairs will probably be the case, maybe even the rule, in most places in the future. Maybe fuel generators that kick in to replace the mains supply itself will become a necessity.

For some reason, even high-end desktop PC’s don’t provide a backup battery. The only solution is to use an UPS that can also keep wireless routers and printers running. If a wireless router goes down, all wireless connections to it are lost. If a printer goes down during a big print job, you have to run the whole thing again. Fortunately, an UPS for every device is not necessary because even a relatively cheap unit designed for home use can connect to many devices.

See the image below of the back of an UPS designed for home use made by APC. APC is the best known manufacturer, but UPS made by CyberPower are also very well regarded. 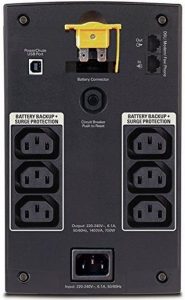 Back view of an APC UPS unit designed for home use showing its ports and 6 UK plug-in sockets. Click on the image to view its full size

The APC model shown above provides sockets for six devices providing battery backup and surge protection, one USB port and UK in-and-out telephone ports. The socket at the bottom connects the UPS to the mains electricity supply.  The PC is connected by plugging its power cable into one of the six plug-in sockets, as are the power supplies for a router, printer, etc.

UPS units come with software that monitors and controls them and provides customisable settings, such as how long to wait until shutting connected devices down. The software can tell you how much backup battery time is available. The more devices that are connected, the lower the backup battery time. Note that an UPS can work without installing the software. How long an UPS can keep everything going after a power outage depends on the number of devices connected to it and the storage power of the battery supply. The cheaper units have fewer capabilities and less battery storage capacity to keep things running.

Almost all UPS use replaceable batteries. As the battery ages it takes on less charge until it requires replacement. The main consideration is whether a normal user can buy replacement battery and do the job or whether it has to be done by an experienced technician.

I have just removed the two front panel screws of my UPS. There is a label that lists all replacement battery types for the unit, but there is no access to them. It looks as if the top and front panel have to be removed to get at the batteries. If you are unsure of what you are doing, it is best to get an experienced person in to do the job for you.

Amazon provides excellent purchaser reviews on the UPS units it sells, which vary in price from £70 to £1500. Most home users won’t need a unit costing more than £70 to £100. Even if you buy a unit from another seller, if it doesn’t provide reviews, read the purchaser reviews on Amazon before making a choice.

I read several reviews in which the users say that they themselves have replaced the batteries of their units. Amazon provides answered questions that are also good sources of information.

If you use an extension lead that connects several devices you must not connected it to an UPS unless the combined use of power, measured in Watts (W) is less than the power capacity of the UPS (e.g., 700W).

Read the following article that provides information on the differences between the VA and W specifications of an UPS.

If you are experiencing electrical spikes…

If you experiencing electrical spikes, do not set the PC to come back on immediately, even if the UPS provides surge protection, just in case multiple spikes occur over a short period, which can damage or even destroy hardware.