Problem – Upgrade Win7 PC: My Win7 computer running Windows 7 has become very slow. Should I upgrade it to Win10 or build or buy a new one? 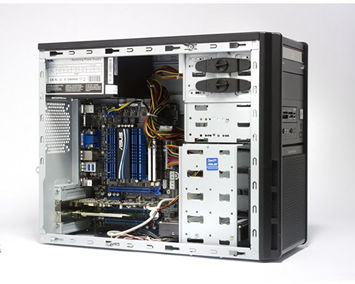 There have been a few fairly recent developments that are no doubt designed to coerce users of Windows 7 computers to upgrade them to Windows 10 computers.

Microsoft is becoming evermore desperate to get users to migrate from Windows 7 to Windows 10. The reason being, at the end of 2018 Win7, released in 2009, is still running neck-and-neck with Win10, released in 2015.

I have no proof of this, but it wouldn’t surprise me if updates to Win7 have purposefully slowed it down significantly. I have a Win7 desktop PC and it got so slow for no apparent reason that I tried using the Performance settings to speed it up, but without much success.

The Spectre and Meltdown Intel and AMD processor flaws

The fixes for the Spectre and Meltdown security vulnerabilities, discovered in Intel and AMD processors, add microcode that slows the computers down that run them. However, my PC runs an AMD processor that is only affected by the Spectre vulnerability for which there is no microcode update, therefore it cannot slow my PC down.

In any case, try as I might, I have never been able to get infected with a virus or get one of my PCs taken over remotely, so I don’t take those threats very seriously. But, just in case, I always make system images of my systems regularly so that I can restore them if they get taken down by malware or get hit by ransomware, etc.

Check which of these vulnerabilities affect your PC by downloading and running the free InSpectre tool from Gibson Research. The free Securable tool, also by Gibson research, “displays the status of the three most significant security-related processor features.”

The latest CPUs from Intel and AMD do not have the Spectre and Meltdown security vulnerabilities.

Note that another security vulnerability called Foreshadow, which only affects Intel processors, has come to light. Read more about it in this article:

How to Protect Your PC From the Intel Foreshadow Flaws –

Wikipedia: “Mainstream support for 7 ended on January 13, 2015. Extended [security-update] support will end on January 14, 2020. On September 7, 2018, Microsoft announced that Windows 7 will get three more years of support after January 14, 2020 if users pay for the Extended Security Updates (ESU) service, however this only applies to users of the Professional and Enterprise editions of Windows 7.”

Although you will be able to use Win7 for banking until at least January 2020. Bank accounts will allow you to use a Win7 computer until then. (I am still using a dual-boot WinXP/Win7 PC. I still use Windows XP online for non-banking use.)

However, for the longest future-proofing, you should migrate to Windows 10, because the latest Intel and AMD processors can only use that version of Windows. Read the following article for more information about this.

There are two options available to someone who has a desktop PC running Windows 7 who wants a PC with one of the latest processors from Intel or AMD. Buy a new ATX or micro-ATX form factor motherboard, Intel or AMD processor and RAM memory and install them in your existing ATX case or buy a new PC. There is no need to buy Win10 because you can still get it free of charge {December 2018]. You download the latest Disc Image (ISO File), so there are minimal updates that Windows Update installs. You don’t need a licence. Win10 just keeps working after you install it. There is no warning that Win10 requires activation within a specific number of days or it stops working. The reason being that Microsoft wants users to abandon Win7.

Note that motherboard, processor and RAM memory bundles are available online and in computer stores. Some of them might suit your needs. Again, due to the profit margin of the vendor, it is cheaper to buy an individual Intel- or AMD-based motherboard, Intel or AMD processor and stock cooling unit and as much RAM memory as you want, The advantage of such a bundle is that its components are guaranteed to be compatible.

If your existing PC uses a mini-ITX form-factor motherboard and SFF case (for small desktop computers), the components are difficult to get and/or are more expensive, so I would buy a new ATX case and power supply unit (PSU) and an ATX or micro-ATX form factor (Intel or AMD CPU supporting) motherboard, Intel or AMD processor and RAM memory and install them in it. Or I would buy a new brand-name PC that has an ATX case.

If you intend to keep your existing case and PSU, you need to make sure that the PSU provides enough power to meet the needs of your new components.

Here is a power-supply calculator in which you add the components your PC has – motherboard, processor, RAM memory, graphics card(s), other adapter cards, drives, etc. When you click its Calculate button, it calculates the Recommended Minimum PSU Wattage.

It is best to buy a case without a power supply unit so that you can buy your own PSU of quality. The PSU that comes with a new PC, especially a budget make/model, might not be of high quality, but the PSU that comes in a case can be a quality unit if the case is made by a manufacturer of quality cases. The specification list seldom lists the make/model of the PSU. However, manufacturers such as Dell and Mesh Computers in the UK allow a choice of components other than the stock ones that includes the PSU.

Click on the image below to see its full size, which shows the choice of PSUs for a custom-built computer from Mesh. The first 400W PSU is the one that comes with the PC, which could be a cheap generic model made in China. I would choose the second certified 500W model, due to the minimal power requirements of the components I choose for a workstation.

Upgrade Win7 PC – Choice of power supply unit (PSU) for a custom-built PC. Click on the image to view its full size

Cheap generic cases almost always come with a cheap, low-quality PSU. The PSU is a key but very much neglected component, so you should always make sure that you have one of high quality. Note, however, that it is rare for a PSU that blows up to take out other components of its computer and extremely rare for such a blow-up to be the cause of a fire.

I have an ATX case and 400W Corsair PSU of quality, mouse and keyboard, so I just need a motherboard, processor with cooling unit and RAM memory.

I chose is an MSI B450 Gaming Plus – £95.00 [Dec. 2018]. It has an M.2 slot for a SSD card drive that I would purchase from Crucial. An SSD card drive is much cheaper than an SATA SSD drive of the same capacity that connects via an SATA data cable to the motherboard and to the PSU by an SATA power cable.

Note that the AMD Ryzen 3 second-generation processor itself provides the RX Vega Graphics through graphics ports on the motherboard.

I intend to use my existing hard disk drives and buy 8GB of memory from Crucial’s site or from Amazon. For your information, I have often been able to buy Crucial memory cheaper on Amazon than from the Crucial site. The MSI B450 Gaming Plus motherboard uses DDR4 memory, so this DDR4 Crucial memory from Amazon should be compatible. – £57.00.

However, the MSI B450 Gaming Plus is a much better motherboard than the Asus Prime A320M-K motherboard. You can add a 500GB SSD M.2 card drive for only £60 and 1TB model for only £115. Moreover, the Ryzen 5 first-generation CPU of the bundle does not provide a built-in Radeon Vega graphics processor, which the Ryzen 3 second-generation CPU does, so you have to add a graphics card if you don’t already have one.