You are here => Home => Many Google Android devices are easily hacked 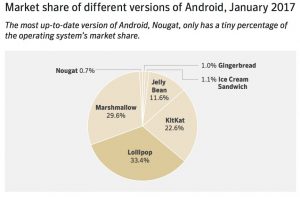 Android devices – Market share of different versions of Android in January 2017. Click on the image to view its full size

Google Android devices are not monitored effectively by anti-virus and malware apps. That fact has been the case ever since Android first became available. As expected, Google doesn’t advertise it. The following article explores that state of affairs.

Now a security analyst of the Israeli Defence Forces, Gal Beniamini, says that his research has revealed that millions of Android devices are vulnerable to hacking attacks. The more so if it is a “brute force attack” on devices using processors made by Qualcomm and/or that use Full Disk Encryption (FDE).

A “brute force attack” involves using an array of computers to overwhelm the security measures of computers that are online doing everyday activities, such as texting and emailing. The hacking equipment tries using a different password millions or even billions of times a second, trying dictionary words first.

Weak passwords can be hacked in minutes by brute-force attacks

If hackers can hack Android devices, so can security services worldwide

The FBI and Apple itself was apparently unable to hack into a terrorist’s locked iPhone, so strong is the encryption that Apple employs. But the security flaws in Android devices, discovered by the Israeli security analyst, make it possible for hackers and security services worldwide to gain access to them.

The Israeli security analyst says that only by upgrading the hardware of affected Android devices fixes the vulnerabilities that he discovered. That means buying new smartphones and tablets.

However, Google has paid the analyst for his findings via the company’s Vulnerability Rewards Program and says that the security issues have been patched. But, as we know, many Android devices are not updated by patches or by Android-version upgrades. Moreover, the analyst has said that hardware upgrades are required to fix the security vulnerabilities, not patches.

In short, there is no way that I would use an Android device to access online accounts. Many owners of Android devices use the same passwords for all or several websites and the hackers are well aware of that fact. If they hack one password, they will try using it for a particular user on other websites and for email addresses.