You are here => Home => Privacy dangers of facial-recognition software 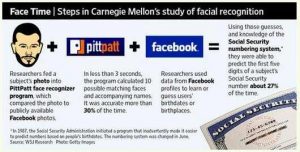 The dangers of facial-recognition software. Click on the image to view its full size

Which companies and organisations and government departments are developing facial recognition software?

There are many outfits developing facial-recognition software. Namely, Google, Facebook and the FBI.

Facebook’s software is called DeepFace, which says of itself on Facebook’s site: “Closing the Gap to Human-Level Performance in Face Verification.”

DeepFace: Closing the Gap to Human-Level Performance in Face Verification

The FBI calls its software Next Generation Identification.

Google had not named its facial-recognition software

As might have been expected, Google had not named its facial-recognition software [December 2016]. The main aspect to bear in mind is that the US and UK security agencies might be able to use any of those developments. Denials cannot be trusted these days.

Apparently, Facebook’s facial-recognition software can identify the same person in different images with a 97% accuracy. Apparently, Facebook’s aim is to be able to identify people as accurately as possible even when their faces are not showing in images. This is achieved by using body shapes, hairstyles, clothing, footwear, posture, etc. Apparently, an accuracy-level of 83% has been achieved.

Bear in mind that useful software of this kind is constantly being developed and improved. In order not to spook its users, Facebook has stated that it is not using the images of people on its website to test its software, it is using images posted to Flickr, which is no doubt spooking their owners.

As usual, Google has come up with a very timely new free service called Google Photos. Now, I wonder what the main aim of that is. It has the ability to categorise the users’ images. When you conduct a search, you are presented with these three categories: People, Places and Things. If, say, you click on the More link provided by the People option, you are shown in date order every image you have uploaded to the site.

Google doesn’t seem to be able to identify people from anything other than their faces, but that doesn’t have to mean that it cannot identify them by using other physical factors for its own purposes, the main one, of course, being building up user profiles that are used to sell customised ads across the web.

Facial-recognition software is being developed to be able to recognise situations in images in the same ways as the human brain does. That is achieved by analysing many images of a person, making a note of the lighting, hair-colour and cut, clothing, posture, etc. So, when it comes across an image of that person with his or her back to the camera, it can determine with a high degree of accuracy who it is and label it as, say, John Michael Smith, present age, 29, back turned to the camera. Then John Michael Smith will be recognised by the software no matter how he has been photographed.

Therefore, it is easy to see where this facial and other identification is heading. People wearing glasses connected to the web or driving cars connected to the web are taking video footage of people walking in the streets or in shops or other places and pretty soon Google and Facebook and the FBI have plenty of data on the people videoed – where they were, their vehicle registration numbers, make/model and colour of car, etc. that can be added to the information they already have about you.

Facial-recognition software is already on millions of smartphones and tablets

Facial-recognition software is already on millions of smartphones and tablets, the level of which is constantly increasing. Images of people are being harvested by CCTV, ATMs, webcams on laptops and tablets, wearable devices, etc. Who knows what happens to it?

The default settings of the Adobe Flash Player, used to play video on websites, is to allow visited websites that use the player to use the camera and microphone of the visitors’ computers.

The user has to disable those default options and even then how can you be sure that they are disabled? That is why I have put a piece of black electrical tape over my laptop’s camera and I only use a 2G standard mobile phone that does not have a camera or microphone. The idea being not to allow information about you to be collected secretly.

In my opinion, only fools use Google, Facebook, Twitter, etc., or anything else that requires as much of your private information as it can get and they provide their real information. If you are a performer, etc., you have to post images of and information about yourself on the web, but most people do not have to do that, so they should make up the information they provide or better still not provide it, because it is best not to give these organisations information about you that they can build up with advances in technology such as facial-recognition software.

Are governments providing information and photos of you to the social sites?

There is information that governments have about you such as what is provided on a passport – an image of you, where you live, date of birth, etc., which is supposed to be private, but is it? The security agencies could be providing it to these social sites in order for them to be able to identify people as completely as possible. Not everyone uses social websites, so how else would they be able to find information about those people? They are not developing facial-recognition software to such highly advanced levels for nothing. They want to use it to sell you ads that you click on and who knows what else?

You will inevitably appear in images taken by friends, relatives, people taking photographs in public, etc., that find their way on to the web, but unless the government provides the social sites with information about you, they won’t have any information on you to start the identification process.

There are plus points about this business. For example, you could be warned if people are doing research on you, but, for the most part, it is not going to be advantageous. I find seeing customised ads unacceptable. You merely have to look on the web for something and you will find ads for what you looked for appearing on other websites. This means that Google, the biggest provider of customised ads, is reading your web-browsing history without your permission.

Cyber criminals could get hold of the information about you and steal your identity to apply for credit, mortgages, loans, use convincing scams against you, etc. Many people have lost large amounts of their money in this way already and it will only be getting much worse. It will mostly be the elderly people and the unwary who will be falling victims to that kind of crime. Maybe starting a business that provides effective disguises for people will soon be making someone a billionaire.