Is it possible to restore a backup or system image to a different PC?

I have used Macrium Reflect to restore a system image created on many PCs on those same PCs. I have also often used it to restore individual files. However, I am wondering what would happen if I lost an entire PC due to theft or a complete failure of say the PC’s motherboard. In order not to lose my data and the PC’s setup I would have to restore the backup or system image to an upgraded or to an entirely different PC.

Even if only the motherboard were replaced on the existing PC, the device drivers for its components, made by different manufacturers, would all be different to the drivers that the old motherboard used. If the entire PC were replaced, all of the internal drivers would be different from the ones that the restoration would restore to the new PC. Of course, the device drivers used by peripheral devices, such as printers, scanners, etc., would be the same on a different PC.

You only have to look in the Windows Device Manager to see all of the internal devices that use specific device drivers. Therefore, I am pretty sure that a restored version of Windows 10 is not going to work on the old PC with a new motherboard or on an entirely new PC.

Is there an issue here or will Windows 10 be able to change the drivers to the required ones by itself?

Restoring a backup or system image to a different PC is also known as a migration.

With Windows XP, it is possible to restore a backup or system image to a computer that has had its motherboard changed or to a different PC. Unfortunately, achieving that successfully with Windows 7, 8.1 and 10 is much less likely to be successful due to the increased complexity of those versions of Windows. However, reports exist on the web of users who have successfully restored a backup or system image of those versions of Windows to a different computer.

What Microsoft has to say about this problem

Here what Microsoft said about restoring backups to a different computer:

“Over the life cycle of a Microsoft Windows operating system, you may have to restore a system state backup that is installed on one computer to the same physical computer or even to a different physical computer. Recovery from the following events may require a restore operation:

“Microsoft does not support restoring a system state backup from one computer to a second computer of a different make, model, or hardware configuration. Microsoft will only provide commercially reasonable efforts to support this process. Even if the source and destination computers seem to be identical makes and models, there may be driver, hardware, or firmware differences between the source and destination computers.”

Here is how to restore a backup to a different PC in Windows XP. First, restore the backup from its source. Then, without starting Windows, enter Safe Mode immediately. Next, in Safe Mode enter the Device Manager Pressing the Windows plus the r key to bring up the Run box and entering devmgmt.msc in it works in every version of Windows. Then uninstall all of the internal devices by right-clicking on each one and choosing the Uninstall option.

On the next boot, Windows XP, which is a plug-and-play operating system, finds the new hardware one at a time and installs the device drivers it has in its driver library or it goes to Windows Update online to find and install them. The Windows Device Manager shows if device drivers are correct. Red crosses and yellow exclamation marks indicate problems. To fix them, you right-click on their entries in the Device Manager and choose to uninstall them, then reboot the system and hope that Windows XP reinstalls them correctly.

The only reliable way to restore a Windows 7/8.1/10 backup to a different PC is to use a backup tool that provides that feature.

Using backup/imaging tool to restore to a different PC

Fortunately, backup and imaging software exists that can restore to a different computer. Unfortunately, this feature is only made available by backup tolls that are not free.

How to Restore Windows System Image to New Computer with Dissimilar Hardware? – 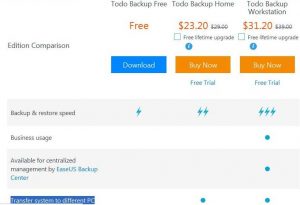 Using a backup tool to restore a backup to a different PC. Click on the image to view its full size

Apparently, Macrium Re-deploy can also restore an image to a replacement computer, in all of the paid-for editions, but, unfortunately not the free edition of Macrium Reflect. Click the link below for information on this topic in the Macrium KnowledgeBase.