You are here => Home => Replace laptop keyboard with a new replacement 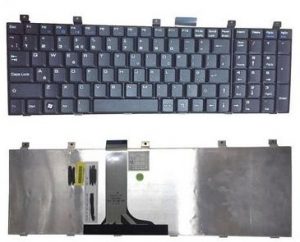 Detailed information on keyboards and mice

Visit the Keyboards and Mice section of this website for detailed information on them.

Replace laptop keyboard. – A few of the keys of my MSI M662 laptop that runs Windows XP and Windows 7 in a dual-boot system started to malfunction. Namely, the a, w, s and 2 keys. They would work sometimes and not work at other times, making entering user names and passwords a hit or miss affair. A major hassle if you are only allowed to enter a password a few times before having to reset it. So, I used a wireless keyboard, which made entering information difficult if I had to read it from documents.

I knew that laptop keyboards are replaceable if a replacement for a particular model of laptop is available. My laptop dates back to 2007, so I thought that I would only be able to find second-hand, salvaged keyboards. To my surprise, many sites had a new UK-layout keyboard for the MSI M662, but they were relatively expensive at around $58, so I searched eBay, which had plenty of cheap new UK keyboards from Hong Kong available. I ordered and paid only £12 for one on a Sunday and received it on the following Tuesday.

A few other things to try before replacing the keyboard

However, there are a few other things you can try before replacing the keyboard.

You can use an external USB keyboard. Unfortunately, when two keyboards are connected both of them work, which means if any of the laptop’s keys are touched they produce letters. The best way to prevent that is to remove the internal keyboard – as shown in the service manual or a YouTube video for the make/model of laptop – and disconnect its cable.

Easy repair for laptop keyboard (when several keys are not working) –

“If several keys are not working, the problem might be a little oxidation on the cable contacts. Here is a possible fix for it.”

I am using an external Logitech mechanical USB keyboard with my laptop right now to write this because I prefer using it to the laptop’s keyboard.

Below are two interesting articles on mechanical and non-mechanical keyboards.

If You Haven’t Tried a Mechanical Keyboard Yet, You’re Missing Out –

It is also possible to buy new keyboard keys

It is also possible to buy new keyboard keys from websites. You remove the old keys and install the new ones. For example, the laptopkey.com site provides key replacement kits and video tutorials for brand-name laptops.

However, you might find that installing new keys does not fix the problem. New laptop keyboards are cheap, so I prefer buying a new keyboard, which is guaranteed to fix the problem of keys not working if cutting a small trip off the ribbon connector doesn’t work.

Quite a few MSI laptops use the same keyboard, so I was able to find a YouTube video that showed how to remove and replace one. I just had to remove the bezel above the keyboard by prizing it out, remove five screws, remove the keyboard, detach its ribbon cable by pulling the socket-device keeping it in place out slightly and install the new one by doing the reverse – pushing the data cable into its socket and pushing the cable-securer built into the socket in. Then I just had to push the keyboard into place, screw it in and replace the bezel. Thankfully, it was fully functional.

How to replace or remove keyboard in notebook MSI GX740 –

Now I intend to buy a new bigger hard disk drive, make a system image of Windows 7 using the free version of Macrium Reflect and restore it to the new drive. It’s a simple matter of removing the old SATA hard drive and inserting the new one.

Note well that if you want to install an SSD (solid state) drive, sometimes it is not possible to upgrade to one even if the laptop uses an SATA hard disk drive. (SSD drives use the SATA standard.) Use the “Solid State Drives Advisor Tool” on crucial.com to find out if your brand-named laptop can use an SSD. If only RAM memory upgrades are available, then your laptop can’t use an SSD.

Unfortunately, it is not possible to upgrade my laptop to an SSD, so I am going to use an Hitachi 500GB hard drive costing only £30, which is considerably cheaper than a 128GB or 256GB SSD would cost.