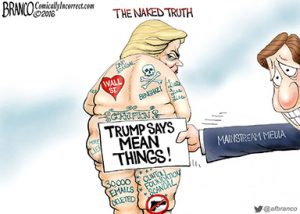 Hillary Clinton: The hidden naked truth. Click on the image to view its full size

RT is a global television broadcaster based in Russia, the USA and the UK. It broadcasts on Freeview channel 135. The UK’s NatWest bank has given it notice of the closure of its bank accounts without providing a reason, ending a banking relationship of over 10 years standing.

As if we needed more proof that the establishment-corporate-banking-media complex is engaged in making sure that only its views are reported.

I have made many comments successfully on online newspapers using information that was only provided by RT and other alternative media sites. If RT is disseminating disinformation, there is nothing to prevent the mainstream media from pointing that out. It seems to me that RT is doing that to the mainstream media. It’s called free speech, which, along with human rights, the West boasts of having. But our current lot in the West has so screwed everything up that they can only tolerate having their own views made public. To me this is a very bad omen.

RT gave Brexit a platform that none of the mainstream media did and reports on the Wikileaks email leaks that would be very damaging to Clinton if reported. Unfortunately that is not the case in most of the corporate-owned mainstream media in the UK and USA.

If Clinton and the Democrats hadn’t been up to no good there would obviously be nothing to leak. But their wrongdoing is very much in the public interest, so should be widely reported.

I have never read or heard anything exposing RT as a disseminator of disinformation in the mainstream media. Why? Obviously because it isn’t disinformation.

This is a slimy underhand attempt to drive RT off the air. Unfortunately, par for the course for this base establishment-corporation-media complex.

This week the RT TV channel in the UK was given two months’ notice of the closure of its bank accounts with the NatWest bank. No reasons were provided in the letter that RT received. The move is obviously politically motivated and aimed at discrediting Russia.

In my opinion and the opinion of the film-maker Oliver Stone, RT is a reliable source of news and information.

Here is a good example of the kind of political commentary that RT provides that the heavily-controlled mainstream media do not. Personally, I feel enlightened from having watched it, whereas I feel mostly idealistically brainwashed by much of the political output of the BBC, Sky and ITV.