My desktop PC is missing memory. It has an Asus P8b75-V motherboard and 4 RAM memory modules of 4GB each, totalling 16GB, all of the same type. Until recently, all of the memory was working well, but then all of a sudden only 8GB of the 16GB was showing in the UEFI BIOS and Windows 10 and being used.  The AMI UEFI BIOS is the latest update available. All four modules and all of the four DIMM memory slots on the motherboard are definitely fully functional. I tested them individually. But, strangely, no matter how I install them, I can’t get more than 8GB to work. 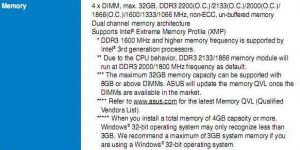 Missing memory – The memory information from the user manual of an Asus P8b75-V motherboard. Click on the image to view its full size

This is an unusual missing memory problem. To solve it, you need to read the information on the memory in the user manual of your PC’s motherboard. Note that just because each module or DIMM slot works on its own doesn’t always mean that they will all work together. However, if you got a module to work in each of the slots that does mean that all of the slots are functional.

It is possible that memory that was not fully compatible with the motherboard could function for a while and then not function all of a sudden. Especially if you changed the memory settings in the UEFI BIOS.

The user manual for your motherboard provides a Quality Vendors List (QVL) that lists the memory manufacturers tested to be compatible with the motherboard at each DDR3 module speed (frequency). A short extract from the list for your motherboard is shown below showing the information for DDR3 1866 MHz and DDR3 1333 MHz capability. 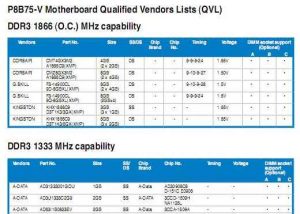 Use the download link below to obtain a copy of the motherboard’s user manual in the PDF format.

Missing memory – Reset the UEFI BIOS to its default settings

If you have been changing any settings in the UEFI BIOS, including memory settings, they may be the cause of your problem. Therefore, the first thing to do is to reset the BIOS to its original settings or set its Optimal Defaults. The image below shows the relevant instructions on how to do that in the user manual for your motherboard. All of the major motherboard manufacturers provide such information in their user manuals. If the problem still exists after doing that, read on… 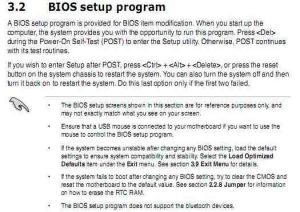 Instructions in the user manual of the Asus P8b75-V on how to reset the UEFI BIOS. Click on the image to view its full size 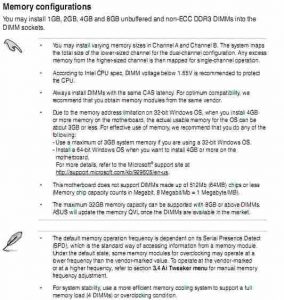 The possible memory configurations of the Asus P8b75-V motherboard. Click on the image to view its full size

High-capacity memory is double-sided, but lower-capacity single-sided DDR3 memory is available but can be installed in any one slot, not more than one. The manual suggests using the A2 slot.

If you have, say, a kit containing two 4GB modules, in order to have them working as a single module in, you can install them in either the blue or black slots, but for the best compatibility install them in the slots marked A2 and B2. If you have a kit containing four identical DIMM modules, you can install them in all of the slots. According to the motherboard manual, you can install a maximum of 32GB made up of four 8GB modules. High-capacity modules generate quite a bit of heat. Therefore, with that much memory, it is a advisable to fit heatspreaders to the modules to keep their temperature as low as possible. The cooling inside the PC’s case should also be adequate in order to prevent a build up of temperature.

Support for single-sided and double-sided memory modules of the Asus P8b75-V motherboard. Click on the image to view its full size

For system stability, all of the DDR3 memory modules must have the same specifications – voltage, CAS Latency and speed (frequency)

Note that if you use memory of differing speeds (frequencies) and the same CAS Latency, Windows makes all of the memory run at the speed (frequency) of the slowest module. You should not use modules that have different CAS latency. If you do have modules that have a different CAS Latency, the advice in the following forum thread might get you up and running with them.

You probably have modules that might have the same specifications of type (DDR,DDR2,DDR3, DDR4) voltage, CAS Latency and speed. However, over time, even RAM memory from the same manufacturer with the same part number can be made up of differing manufacturing components. Some motherboards are sensitive enough to any differences that they don’t work. For that reason, RAM manufacturers do not support memory that is not bought from computer stores in one kit.

If you have memory made by different manufacturers, the chances of the modules working together becomes less likely.

For the best results buy your memory from crucial.com

To solve your problem, if I were you, if you must have 16GB, I would buy four identical 4GB modules from Crucial.com, which guarantees that its memory is compatible with specific makes and models of PC and motherboards or you get your money back.

Note that you must be using a 64-bit operating system – in your case 64-bit Windows 10 – in order to be able to use more than around 3.2GB, which is the maximum amount of memory that a 32-bit operating system supports. For most users, 8GB of memory is more than adequate, maybe you should only buy two 4GB modules and install them in the A2 and B2 slots, as advised in the motherboard’s user manual.

Use the memory Advisor Tool to look up your Asus P8b75-V motherboard. Since most people only want one or two 4GB modules, you should be able to sell the memory you have on eBay or Amazon.