You are here => Home => Missing or corrupt Registry error message 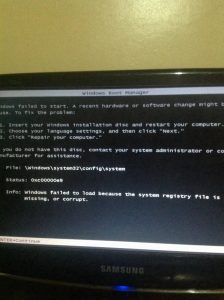 Windows missing or corrupt Registry error message. Click on the image to view its full size

Corrupt Registry: When I switched on my Windows 7 Home Premium desktop PC, it gave me the message, shown in the image I sent you of its screen. – “Windows failed to load because the system registry file is missing or corrupt.” Please help.

The solution provided by the error message that might not work

The corrupt Registry error message itself  provides the following solution:

Firstly, if you use an old Win7 installation disc on a fully-updated Win7 computer to do repairs to corrupt files, it has older files on the disc than on the computer and not only might fail to recover the system but might screw it up further.

Moreover, in order to boot the system from a CD/DVD disc or USB flash drive requires that the boot device is set as first in the order of boot devices in the UEFI/BIOS. If you cannot boot from a disc or flash drive, the boot settings of the boot order is usually the cause.

Windows already has a backup of the system directory

The boot problem in this case is that the files in the system directory – the path to which is: C:\windows\system32\config\system – are missing or corrupted.

Fortunately, Windows already has a backup of the system directory. Therefore, it is only necessary to restore that backup to fix the problem.

Place the Win7 installation disc in the CD/DVD drive and allow it to boot the system. How old the disc is does not matter, because, in this case, system files are not involved, you are just using the disc to bring up a Command Prompt so that you can use commands to make Windows restore its backup of the corrupt Registry.

Note that you can also boot the system and access the Command Prompt with a Win7 repair disc that you make Win7 create. To create a repair disc just enter the word repair in the Search box and click on the link that Windows provides.

Using the Win7 installation disc, when you get to the screen that sets the language and keyboard, press the Shift and F10 keys to bring up a  Command Prompt. Then enter the following commands, as is. Lower case letters can be used, because the prompt only works using them even if you enter capital letters.

The image below shows the Command Prompt with the first command – cd c:\windows\system32\config – entered.

Using the Command Prompt to fix a corrupt Registry. Click on the image to view its full size