You are here => Home => I have a new Windows 8.1 laptop PC. Is the Microsoft Windows Defender anti-malware scanner that it uses by default sufficient or is there a better free scanner?

I have a new Windows 8.1 laptop PC. Is the Microsoft Windows Defender anti-malware scanner that it uses by default sufficient or is there a better free scanner?

Microsoft has diminished the effectiveness of Windows Defender, which comes on new computers running Windows 8.1 so as not to compete with the third-party anti-malware companies. It used to be called Security Essentials, which is very good but it is only available for versions of Windows from XP to Windows 7. Windows 8.1 uses Windows Defender that you have access from the Control Panel if you haven’t right-clicked its icon on the taskbar when it’s up and chosen to pin it to the Desktop’s taskbar. Windows XP support for Security Essentials ends in July 2015 for XP users already using it. It cannot be freshly-installed on XP systems. Microsoft has probably diminished the effectiveness of it as well.

I am still using an MSI laptop bought new in 2007 that can run Windows XP and Windows 7. It has worked flawlessly with daily use for 7 years and is still going strong. I recently replaced its keyboard that cost £12 from Hong Kong because a few keys weren’t working properly. The key contacts wear out after prolonged use. But although it is 7 years old I got an identical new keyboard which was easy to install. You can replace most of the components of a laptop – the fan, the hard drive, SSD drive, the DVD drive, screen, add more memory, etc.

Note well, find out if your laptop will be able to upgrade to an SSD drive before buying one, because not all laptops can be upgraded from an SATA hard drive to an SSD, which also uses the SATA interface. Use the crucial.com SSD upgrade advisor to find out if a particular laptop can use an SSD.

I still use Windows XP Pro most of the time. AVG Antivirus Free uses too much RAM memory and installs too much software for my liking. This affects a laptop running one or two GB of RAM memory badly when running Windows 7 or 8.1. My laptop has 2GB of memory, its maximum amount, and runs the 32-bit version of Windows 7 well. Note that a 64-bit version of Win7/8.1 requires twice as much memory as a 32-bit version. So, my laptop would need 4GB to run a 64-bit version as well as 32-bit version. For this reason, I use Malwarebytes Anti-Malware Premium, which costs under £20 for a year’s protection and can be set to scan particular drives for all types of malware, including rootkits. It uses much less memory than AVG.

Alternatively, you can install AVG as your real-time scanner if you have sufficient memory and use the free version of Malwarebytes, which has to be run manually, as a secondary scanner. No malware scanner picks up everything, so it’s advisable to use more than one. Get it here:

You should read the screens to see what is being installed with free software because Google pays to make some of these companies install its spyware Chrome browser and toolbar by default. This can happen with the Adobe Flash Player – updates and initial installs – and with the CCleaner system-cleaning utility. You have to disable those from being installed if that is the case, which I always do.

Note that the latest version of CCleaner installs itself to monitor your system like a malware scanner without asking for permission. It places its icon in the Notification Area. Since CCleaner is sponsored by Google, I disable its two monitoring settings under Options => Monitoring, shown in the image below. I use nothing by Google or sponsored by Google. It is all spyware. 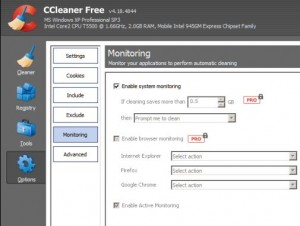 CCleaner also enables by default a setting called “Intelligent Cookie Scan” that keeps the tracking cookies of the companies that track users, such as Google and Yahoo! This setting is not available under Options => Settings. To disable it requires reinstalling CCleaner. It appears that the CCleaner’s developers want the users not to notice that that setting is set by default during an installation and don’t want the users to be able to see it under settings and disable it. Here is an image of the installation screen: 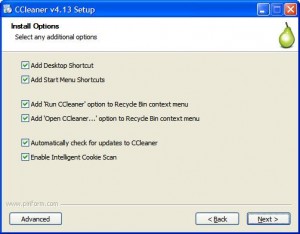 If you haven’t already got Trusteer Rapport app installed that protects any website from phishing attacks, keylogging, etc., download it from here:

It installs its icon to the right side of the web browser’s address bar – a white arrow and a green background. Click on the icon to see if, say, a banking site is being protected. It will say that the site is protected. If not click the “Protect this website” button. It can protect any site that you access with login information, such as PayPal, which is necessary because all you need is a password and email address to access an account. I have a 15-character complex password for my PayPal account that I change periodically. Most banks make you supply numbers obtained from a machine in your possession that you have to use a PIN to access or send you the numbers over a mobile phone, which makes it impossible for hackers to get in with just a password and user name.