Stop Edge opening at startup. – If the user clicks at the centre of the first screen, Windows 10 opens its default Edge web browser seemingly automatically even when another browser is set as the default, such as Firefox.

At startup or coming out of Sleep, the timing of which is set in the Screensaver settings, Windows 10 first presents a screen that  links to the current article that the Edge browser is presenting.  If you click in the middle of that screen, which is what most users do,  Windows 10 then moves on to its sign-in screen (shown below) where you enter your PIN.

My computer uses the Firefox browser by default. I was getting fed up of having Edge opening after logging in, so I searched for fixes. There are plenty of them on the web, including fixes that involve editing the Windows Registry, and using the Group Policy Editor that only Win10 Pro provides. Unfortunately, NONE OF THEM WORKED!

I grew more and more angry with Microsoft imposing its browser on me against my will with no way of disabling the forced promotion. When these huge corporations have a captive audience, they have a tendency to take infuriatingly unscrupulous liberties.

The way I got around it was to run the free version CCleaner tool after the Edge browser started in order to remove the Microsoft-related cookies that Edge lays every time it opens.

Edge does not open automatically, the user clicks a link on the first startup screen that makes it load

One day, I accidentally clicked elsewhere on the opening screen instead of clicking at its centre. Lo and behold, the Edge browser failed to appear after logging on. I put the computer into Sleep and tried doing that again and again Edge failed to appear, Therefore, it is an illusion that the Edge browser comes up automatically. The user gives it permission to come up by clicking in the middle of the first startup screen that is a link to the current presentation on Edge.

You can get rid of the current Edge Lock screen image by replacing it with one of the Win10 stock images or an image of your own.

To do that enter screensaver in the Start search box and select “Choose your Desktop image”. – The image below shows the image that Edge used on 21 August 2021. The selection shows as the Background => Windows Spotlight option. The message (or something else) that links to Edge appears in the centre of the image. When you click on it, Edge loads after you log in. You just have to use the Picture option on that drop-down menu to select another image – one of your own or any of the stock images will do – and the Edge image will not load. – Problem solved! 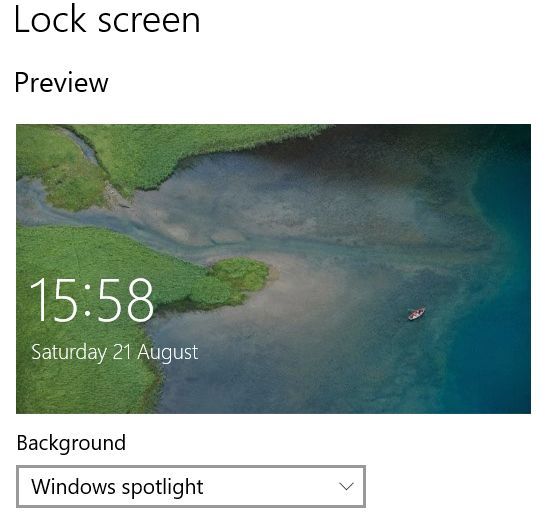 About Eric Legge 261 Articles
I am an experienced PC technician who has been the owner and sole writer of the PC Buyer Beware! website since 2004. I am learning all the time in this very dynamic, ever-changing field.