The first presidential debate: Hillary Clinton cannot use a step-stool or have cough breaks, but can have a raised podium 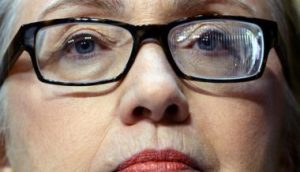 The first presidential debate is on Monday September 22, 2016, starting at 2:00 am on Tuesday morning in the UK. It is set to last for 90 minutes, but, for the first time in history, might not go the full distance due to Hillary’s frail health.

The presidential debate commission has turned down Hillary’s request to use a step-stool, which she uses when on stage for lengthy appearances, as illustrated in the video linked to below.

When appearing on stage for lengthy periods, frail Clinton needs a step-stool or the assistance of a secret-service agent or two just to remain upright.

Coughing breaks are also not permitted.

However, Hillary Clinton will have a customized podium that makes it appear as if she (5′ 7″) is as tall as Donald Trump (6′ 3″). In keeping with the MO of the establishment: where there is no equality lower things until there is, as in the US and UK education systems. In this case, make what is lower look higher.

More than somewhat pathetic, not so?

Hillary Struggles to Stand Without Step-Stool, But Won’t Get One For Debate