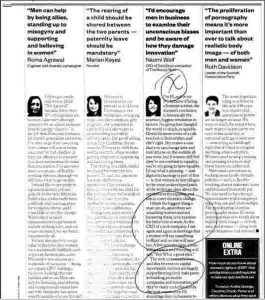 Naomi Wolf lying about being the CEO of a tech company. Click on the image to view its full size

The myth of Naomi Wolf: She is not the CEO of a tech company as she claims in a Sunday Times article

These radical feminists are mostly falsifying nut cases and/or have jumped on to the feminist bandwagon in order to obtain fame and fortune, in my experience.

Here is what Naomi Wolf, feminist author of “The Beauty Myth”, says in the Sunday Times magazine, dated February 4, 2018, in an article titled “The next frontier” that celebrates the Suffragette centenary: “As the CEO of a tech company, I see again and again in meetings that a woman will say something brilliant and no one will hear her. A few minutes later, a man will restate it and everyone will say: “Yes! What a great idea.”

If you want to read it, here is a PDF file of the Sunday Times magazine article: feminist-naomi-wolf-lying

That brilliant-female-robbed-by-wicked-mediocre-men statement is almost a feminist stock response.

Have a look at the team of her website, DailyClout – https://www.dailyclout.io – (About Us => Our Team) that must be at the meetings. It consists of SIX females and THREE males There is only a single team-member with a tech-person description, who is a FEMALE. The rest of the team are information and media people. Where are the tech men who steal the ideas of the tech females? – Pure BS!

In other companies, if the females are having their ideas stolen, why don’t they have enough intelligence to record what they say and then jump up to protest with the proof if that happens? – In any case are there any tech people who don’t know how to use their smartphones to make recordings. Or who don’t know how take out tech patents. Obviously, no top-notch tech people are ever going to have their genuinely innovative ideas stolen.

Technology is all about patents

Technology is all about patents. If you don’t patent your ideas and someone steals them and patents them, then it’s your loss and their gain. Tesla took out patents for the first wireless radio, but Marconi used them to be the first to do a wireless broadcast. But the patent proves that Tesla was the inventor of wireless radio. By the way, he also invented the AC electricity system and wireless electricity, the latter of which has only recently been developed, probably because Tesla intended it to be free to everyone.

Most of the entries are inventions from before the appearance of modern-day feminism. In fact, the latest entry is number 7 – Stem cell isolation – Ann Tsukamoto. Her patent was awarded in 1991. Note that most of the inventions are minor, were patented and end with that one from 1991. Nothing since then. Therefore, feminism cannot lay claim to having been behind most of them and probably none of them. In fact, it can be argued that since modern feminism took hold, women have become even less inventive than they were before World War Two.

Needless to say, the BBC does not allow comments to its articles, no doubt in order not to allow the public to spoil the falsifying force of its propaganda, which is so plentiful now that it is hugely embarrassing, in my opinion. – Feminist, left-wing socialist, pro-EU, anti-Brexit, pro-globalism, pro-migrants, anti-Trump, pro-Palestine, anti-Israel propaganda.

The newspaper DailyClout – https://www.dailyclout.io – takes a very long time to come up. The site itself is somewhat dysfunctional. Try using it yourself. Is that the website a creation of masters of their craft?

Below is an image showing what the archive headings look like. Click on the image to view its full size. The font for the listings needs to be changed because 2017 looks like 207I. 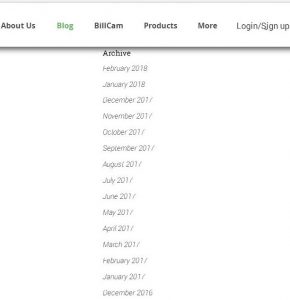 DailyClout’s Fundraiser account has raised $100 of the $50,000 wanted in six months.

The DailyClout YouTube channel currently has 55 subscribers and a few videos.

Anyhow, assume that her fictional tech company were real and employes many male and female tech people, being the CEO at the meetings, why isn’t she taking the women with the brilliant ideas seriously? Pure BS!

Then she says: “The tech community lives and dies by venture capital investment. Women are hugely outperforming their male peers in building profitable companies and innovation, yet they are vastly underfunded by the tech
community.” More pure BS!

Why do they need venture-capital funding if they are or are likely to be so successful? Business ventures with possible potential that require venture-capital funding are start-ups with untested ideas. Venture capitalists are only interested in the money they can make from new ventures. They will invest wherever their instincts smell success. They are not interested in the gender of the person with the ideas for a new venture. More pure BS!

DailyClout is obviously just an empty front, just as Wolf herself is, in my opinion, designed to give her the right to call herself the CEO of a tech company in order to justify making those false feminist statements.

The Suffragette movement did not bother with the fact that more than 50% of men, many of whom sacrificed their lives in World War I, also did not have the vote, while the Suffragettes were causing policed protests, violence, arson, bombings, etc. Most policemen did not have the vote. Those voteless men were also granted the vote in 1918. Universal suffrage was inevitable in the UK. Women were given the vote in New Zealand (1893) and Australia (1902) long before 1918.

Women and The Vote (UK) – Two students argue about the causes of the 1918 Representation Of The People Act.