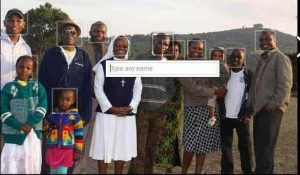 Face recognition – Facebook and Google want users to identify people in images. Click on the image to view its full size.

The image above appears on on someone’s Facebook page. Click on the image to view its full size. As you can see, the faces in it are marked out by face recognition software that has placed boxes around their faces.

I double-clicked on an image on a Facebook page to isolate it. Then, accidentally, I put my mouse pointer on the image and boxes appeared around all of the faces. To my great surprise, when I put the mouse pointer on any face in it a dialog box popped up saying “Type any name”. So, of course, I just entered the name of cartoon characters, such as Olive Oyl, Bugs Bunny, etc. The bad news from a privacy point of view is that Facebook will be able to identify a person in any image that appears on its website if only two or three ignorant users enter the same name.

The image below – click on it to view its full size – shows the British Prime Minister, Theresa May, visiting a typical school in London. As you can see, Facebook wants its users to identify all of the faces except Theresa May’s, obviously because it already knows who she is.

Facebook knows who Theresa May is, so only wants its users to identify the other people. Click on the image to view its full size

I use the word ignorant, because, in my opinion, a dangerous invasion of privacy is going on here that is a threat to freedom of speech if the information is used to restrict or ban people whose political opinions run against the establishment-backed social media.

Both Facebook and Google are going out of their way to get their users to identify people who have not already been identified by their face recognition software.

Many people use fake images of themselves or other images to represent them on their Facebook pages. Therefore, if Facebook can get people to identify individuals in photos on other Facebook pages, it can build up verified groups of people who are related as friends or acquaintances, etc., and then build up identifiable individual personal profiles to which it can provide personalised adverts.

There are many fake Facebook pages that are used to create fake Likes. They can be ignored if they can’t be connected with other pages run by real people who have been identified by other people.

On Wednesday April 12, 2017, Facebook posted the message, below, on its users’ pages called: “How to spot false news”. It gives advice on how to distinguish fake news from real news. The problem is, it regards the corporate-owned (CNN, ABC, CBS, Washington Post, New York Times, etc.) and UK-state-owned (BBC) mainstream media as reliable sources of real news. If you want to read articles on this negative development, web-search for: facebook how to spot fake news. 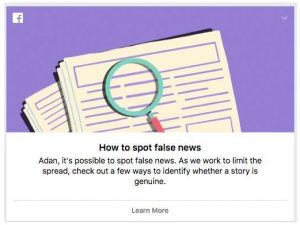 Anyone who witnessed the enormous bias against Trump from most of the mainstream media during the US Election process, knows how unreliable their output is – by commission and omission.

Apparently, the news feeds of Facebook users suspected of being fake news are going to be marked with a label stating: “Disputed by 3rd Party Fact-Checkers”. Which means that “unbiased” mainstream outfits, such as the Washington Post, ABC News and Snopes, have investigated and flagged the article. At least the users will still be allowed to read the flagged articles.

Facebook is constantly trying to link its users together

Facebook is constantly sending its users emails asking if they know a list of people who have pages linked to the pages of their Facebook friends in order to help the process of identification and creating groups on its way. When facebook has identified a relationship, it sends celebratory videos, such as the one shown below. I have not demonstrated a longstanding friendship on my Facebook page, so I don’t receive such videos. 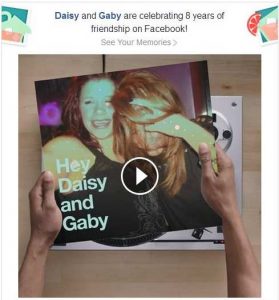 Furthermore, as we should all know by now, Facebook’s huge database is at the disposal of government security agencies that could get up to all sorts of no good with the information under the pretext of nipping terrorist activities in the bud. As we also should all know by now, the US, EU and UK are getting up to all kinds of mindless, decadent social engineering. The information in the Facebook and Google databases would be invaluable in monitoring the effectiveness of that social engineering.

NSA is ‘creating huge facial recognition database by taking millions of images off the internet [June 1, 2014] –

What is the betting that drivers’ licence and passport photos are also being fed in to that database? Create a terrorist threat by waging unnecessary wars and then insist on bio-metric passports to give protection from acts of terrorism, many of which are false-flag events.

If you are unidentified, Facebook wants to know who you are

Note that if Facebook has already identified the people in an image the boxes do not appear around the faces in an image. Most people with a Facebook account have friends on Facebook who have all put their images up on their Facebook pages. Therefore, Facebook knows who all of them are and won’t ask for further identification.

Facial-recognition software that can tell the difference between identical twins

Facial-recognition software – that can tell the difference between identical twins – will then be able to identify you wherever you are if Facebook and Google have identified you and given the information to the US and UK governments and CCTV systems use the software.

In short, you don’t even have to have a Facebook account and you can be identified by idiots if you appear in a photograph put on a Facebook page by anyone. Google is doing the same with Google Photos.

What is even more sinister, in my opinion, is that Facebook and Google – both of them establishment vehicles – are marginalising the accounts or websites or banning users that pose a threat to the establishment’s globalist agendas and the corporate-owned mainstream media fake news outfits.

Heedless sheeple always represent the greatest danger to this world.

Google is not by any means an upfront, honest company. It is a creepy outfit that achieves its aim – to discover as much private information about people in order to deliver customised adverts across their path on the web – in unethical and often downright dishonest ways.

For example, in 2012, the company was caught hacking into Apple devices for information on that company’s users. For more information or confirmation, search for an article called: BUSTED: Google Caught Secretly Hacking Apple Software To Track Apple iPhone and Mac Users.

“Google Photos – All your photos organized and easy to find”

Just as Facebook does, Google automatically runs face recognition on all of the images stored on Google Photos. If you click on any face in an image, you’ll see all of the pictures of that person. Moreover, as in the case of the face recognition used by Facebook, anyone can add a name to the person or people in each photo.

In other words, anyone you know who has taken photographs of you, who then stores them on Google Photos, can identify you by name, thus providing Google’s massive face recognition database with your identity free of charge.

Google itself never provides anything free of charge. It’s an illusion. The cost is always an invasion of your privacy. It uses your private information to create a personal file about you in order to place customised adverts across your path on websites that use Google’s AdWords advertising system.

Fortunately, Google does not provide any free software or service that you cannot obtain elsewhere that is just as good but without the price tag of a gross invasion of your privacy.

Google Photos mines your personal data for advertising and other purposes

Cyber criminals and hackers use Facebook to obtain personal information