The free Belarc Advisor provides detailed system information, including information about Windows 10. It informs you if all of the updates are installed and even tells you which ones are missing. I am missing two updates for the Adobe Flash Player, which Win 10 itself no longer supports, so that is not a problem. If you have the October 2020 update installed, Belarc Advisor says: Windows 10 Home (x64) Version 2009 (build 19042.746).

Read the following article on the latest Windows 10 Update, which should be updated every time a new update becomes available. .

What Is the Latest Version of Windows 10? –

May 2020 – Microsoft has begun rolling out its latest big update for Windows 10 – very slowly. It is a big download – almost 4GB – so requires a fast Internet connection or your computer left to download it overnight.

Woody Leonhard says that the update does not add much in the way of new stuff and is probably buggy because Microsoft is blocking the update to its own Surface machines. Therefore, he suggests choosing not to go ahead with the update until further notice.

Fortunately it is very easy to do that. Just don’t click on “Download and install” that appears in Windows Update, as shown in the image below, when the update becomes available. Apparently, Win10 will remain as its existing version until you do that in perpetuity – unless Microsoft forces the update – as has happened in the past.

Note that a Windows Update option is no longer available in the Control Panel. You have to use Search to access it. 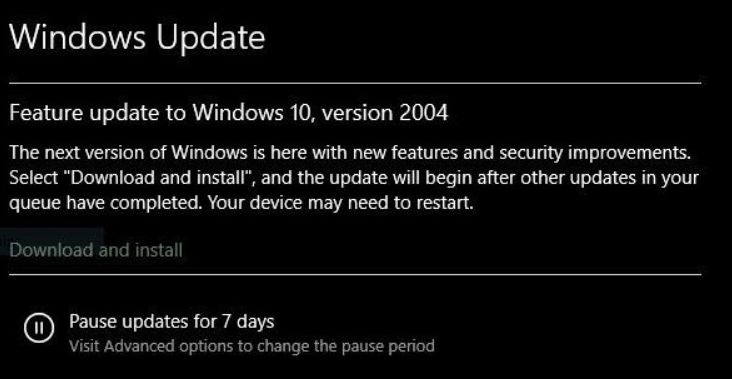 Win10 version 2004 update notice as it appears in Windows Update

“The method for blocking unwanted version upgrades varies greatly depending on which version of Windows 10 you’re running. To find out, click Start > Settings (the gear icon) > System, and on the left side at the bottom, click About.”