Owner whose PC has a dead hard disk drive: When I switch my desktop PC on a message appears that says that there is no operating system. I can hear the CPU making a noise. My PC is 9 years old. How can I fix it?

Reply: The processor (CPU) does not make a noise when it fails. It looks as if your PC has a dead hard disk drive that you must replace.

Open the PC’s case to find out where the noise is coming from. The hard disk drive in a desktop ATX case is in a drive bay that can hold several drives, including CD/DVD drives. In a laptop PC, the hard drive is usually in its own bay. A desktop hard drive looks like this:

PC owner: Yes, the noise is coming from the dead hard disk drive.

Reply: Your PC is 9 years old, but it could have a relatively new hard drive that is still under warranty. Some manufacturers give warranties up to 5 years. If it is under warranty, send it back to its manufacturer for repairs. If not, you have to buy a new or second-hand replacement. You are lucky it lasted for 9 years if the dead hard disk drive is the original drive.

Your PC is old enough to have an old-style IDE PATA hard drive, which uses a Molex connector from the power supply unit and a wide ribbon data cable that can usually connect two IDE hard disk or CD/DVD drives, configured as master or slave drives.

Note that cheap converter cables are available that convert an old-style Molex power cable into an SATA power cable. 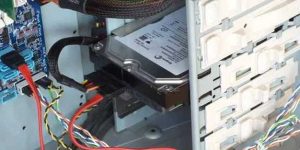 PC owner: Yes, my PC’s drive has those cables, but what are those white things on the bays? My case just has holes for screws.

Reply: Those are mechanisms that fix the drive into the bay when engaged. You don’t use screws in that case.

The view, below, shows the drive sliding into the bay before the mechanism is engaged.

3.5-inch SATA hard disk drive sliding into its 3.5-inch bay. Click on the image to view its full size

In your case, remove both side panels of the case, usually by removing four screws at the back. Consult the case’s user manual on how to open it if you have an exotic case. Next, detach the power and data cable, remove the two screws on each side that hold the drive in the bay and slide the drive out of the bay. When you get a new drive, just reverse the procedure.

Windows XP does not support the SATA data-transfer standard natively

PC Owner: I bought a new Western Digital hard disk drive today, but I got this screen when I tried to install Windows XP. 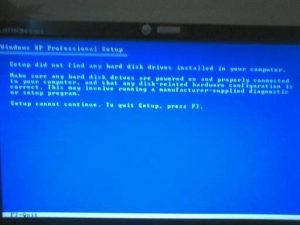 Reply: You are using Windows XP, which does not support the SATA standard. Microsoft stopped supporting XP in 2014. To load the drivers for the hard drive you need to use a floppy disk. You copy the driver to the floppy disk and press the F6 key to install it at startup. Most PC don’t have a floppy disk drive, so follow the information on the following webpage. It provides instructions on how to copy the hard-drive device driver to a CD/DVD disc.

Windows 7 supports SATA, so I would upgrade your system to it. Most computers that run XP also run Win7 if they have a graphics card that supports DirectX 9.0c. Note that you cannot perform an in-place upgrade from Windows XP to Windows 7. You need to install a clean installation of Win7, which requires a full not an Upgrade version of Win7 Home Premium, Professional, etc. I would not go as far as to try installing Windows 10 on your nine-year-old PC. It’s too old.

If you want to use an up-to-date operating system but don’t want to buy Windows 7 or 10, try installing Linux Mint. It is free and supports SATA drives. It works beautifully on a laptop of mine that is 10 years old and also runs Windows XP. Linux Mint comes with the Firefox web browser. I got online without doing anything other than install Mint. It had drivers for all of the laptop’s hardware.

If Windows 7 fails to install, try buying a new SATA data cable for the drive.

Of course, to get up and running again, you will have to restore a backup or system image on to the new drive or clean install Windows or whichever operating system you use.

Note that high-capacity laptop hard drives are usually less expensive than desktop hard drives. You can buy a caddy that allows you to install one or even two SATA laptop hard drives in the 3.5-inch desktop-PC bay. The image below shows an inexpensive Inateck caddy that can hold two 2.5-inch SATA laptop drives (or even two 2.5-inch SATA SSD drives). An excellent way to save money and case space in a workstation that doesn’t require a high-performance hard disk or SSD drive. 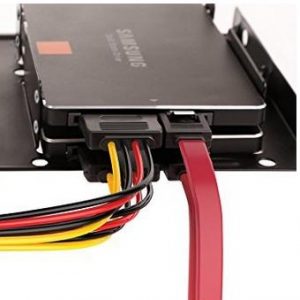