What you need to know about DDR4 RAM memory

A 16GB DDR4 RAM memory module made by Crucial. Click on the image to view its full size.

There are currently four types of DDR (Double Data Rate) RAM memory that desktop and laptop PCs use – DDR, DDR2, DDR3 and DDR4. The latest type is DDR4.

The release date for DDR5 memory was July 14, 2020, but it will take a fairly long time until Intel and AMD adopt it for their processors and the motherboard manufacturers respond by releasing boards that support it.

The processors that support those four types are made by AMD and Intel. A particular make/model of motherboard can only run a processor made by AMD or Intel, never both.  The latest processors of both of those major processor manufactures support DDR4 memory. Therefore, if you want to buy a desktop or laptop PC or build your own desktop PC by installing the components in an ATX case, it must have DDR4 memory as its memory specification.

The Double-Data-Rate (DDR) interface  transfers data on both the rising and falling edges of a single clock signal, in effect doubling the data bus bandwidth without a corresponding increase in clock frequency. The operating system – Windows, Apple’s iOS X, Linux, Android, etc. – runs the memory, which requires no software device drivers.

If you have the user manual that came with a motherboard you bought or which can be downloaded from its manufacturer’s website, it provides all of the information about that particular model, such as how to install memory, the capacities that the memory DIMM slots support, how to install the drives, the processor, how to connect the motherboard to the power supply unit, etc. Some motherboards provide onboard diagnostic LED lights that indicate if a component is working or not.

What happens if you install incompatible DDR4 RAM memory

If you install memory that is incompatible, the computer will not boot and you won’t even be able to enter the UEFI BIOS. Only the processor’s fan and the case fans fans will function.

I always buy Crucial memory for desktop and laptop PCs by using the Crucial System Scanner, a download that scans a system in order to provide compatible memory, or by using the Crucial System Advisor that does much the same by entering the make/model of the computer or its motherboard. The memory that both methods recommend is guaranteed to work with the device or you get a refund.

A PC motherboard can only run one type of DDR memory

A PC motherboard can only run one type of DDR RAM memory.at its various speeds/frequencies.  – Memory is backward-compatible but only within its generation type. That means you can add faster memory of one DDR type (e.g. DDR4) to a computer that was designed to run slower memory of that same DDR type. Unfortunately, the system will operate at the speed of its slowest memory module.

Earlier DDR, DDR2 and DDR3 memory is still available for older systems, but those types only run on old motherboards.

The link below goes to a page on the crucial.com website that provides all of the Crucial DDR RAM memory that the MSI B450M PRO-M2 MAX supports. It is all guaranteed to work on that make/model of motherboard.

The names and data-transfer rates of DDR4 memory

The table below shows the names and data-transfer rates of DDR4 RAM memory.  The higher the data-transfer rate is in seconds, the faster the memory is.  Memory gets more expensive the higher its capacity, measured in gigabytes (GBs) , and the faster it is. DDR4-2666 memory is fine for a workstation. A home user would only buy DDR4- 4400 for a gaming PC that must have a motherboard that supports it. 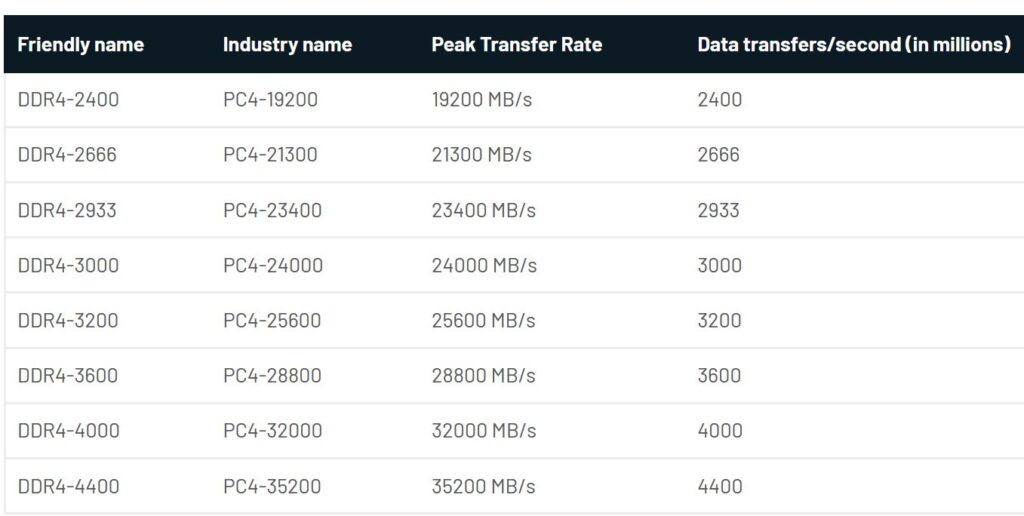 Double-channel and quad-channel memory configurations. are features that the memory and its motherboard must support. The dual-channel configuration operates by using two identical memory modules in alternative slots (if there are four slots) so that they run as a single module. microATX (mATX) motherboards only have two memory slots, therefore can only run in dual-channel mode, but only  if the memory modules are identical. Full-size ATX motherboards usually have four memory slots.

If the motherboard and processor support a quad-channel memory configuration, all four modules are run as a single module.

The website of the make/model of the motherboard running the memory provides a User Manual that provides information on the compatible memory and how to use it in a particular configuration.

Extreme Memory Profiles (XMP) is an Intel technology, that, if available on an Intel platform, allows the memory to be overclocked (run at speeds higher that the stock default speed) by setting an XMP profile in the BIOS. AMD Memory Profiles (AMP) is AMD’s version. There is a small increase in performance at best if such a profile is set, but probably isn’t worth the trouble that can result, so is best avoided.