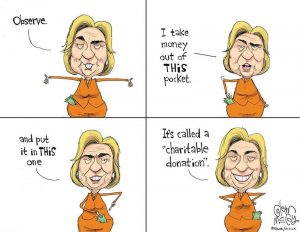 Lionel, the famous lawyer, does the business on the Clinton criminals in the video link at the end of this article.

The Corruption, desperate to stop Trump, is using every trick in the book to do so, therefore he is not of the Corruption.

The Corruption has killed off mainstream-media journalism – now mainly showbiz trivia and political propaganda – and is trying to kill off the web-based alternative media. How? – By handing over control of the Internet to the hopelessly politically correct United Nations.

How could an international organisation, made up of all of the world’s countries, be anything other than hopelessly politically correct? The main aim of the UN, like anything else infected with that disease, is to reduce everything to the lowest common denominators.

Never forget that dishonesty and corruption adds up to cowardice. Only cowards need to live off lies, vice and theft and have to cover their tracks constantly. In my opinion, Lionel is quite right in describing Hillary Clinton as craven.

The secretive UK, for example, has to hold inquiries into much of what it does. These inquiries are usually either stalled indefinitely or are whitewash jobs. The US doesn’t bother to hold inquiries. No doubt because both the Democrats and Republicans and the US courts are its establishment. But the few inquiries the US does hold, such as the 9/11 Commission, are also whitewash jobs with little or no credibility.

Any country run by the Corruption is suffering from a very serious disease indeed. It is mainly responsible for the current world-wide political and financial mess.

Expert: The Clintons are so criminal they make the Mafia blush –