What to do to clean install Windows 10 upgrade versions

Unlike other Windows Upgrade versions, it is possible to clean install Windows 10 Upgrade versions after the initial upgrade has taken place and has been activated with Microsoft.

Changes to Product Activation in Windows 10

Windows 10, Home or Pro version, was a free upgrade up to July 29, 2016  for Win7 and Win.81 licence owners, so it didn’t matter to Microsoft from a cost point of view if a Win10 Upgrade version could be clean-installed. Now that the digital entitlement method of activating Windows 10 is available, product activation takes place automatically if the user upgraded Win10 free of charge or has purchased a license for a Home or Pro version.

After a user has upgraded to Windows 10, Microsoft takes a snapshot of the system and gives it a digital entitlement if Win10 is linked to a Microsoft account (Outlook.com, Hotmail, XBox, etc). Win10 is then linked to a specific user and Microsoft’s servers can recognise the computer from the particular Microsoft account and the hardware that it uses.

Therefore, if Win10 fails and cannot be recovered and the computer is working properly, with a digital entitlement to Win10, the user just has to reinstall Win10 using installation media – DVD or USB flash drive – and it will activate without entering a Product Key. During the installation, the user enters a Microsoft account, which, together with a snapshot taken of the system’s hardware, identifies the computer.

Reactivating Windows 10 after a hardware change

If the user has changed the computer’s hardware significantly so that it requires reactivation, Microsoft provides a solution that avoids having to telephone for an activation code.

“In Windows 10 (Version 1607 or later), you can link your Microsoft account to the Windows 10 digital license on your device. This can help you reactivate Windows using the Activation troubleshooter if you make a significant hardware change later, such as replacing the motherboard.”

A clean install of Windows 10 Upgrade versions can be done just because the user wants a clean installation that contains no elements of the version that was upgraded from (Win7 or Win8.1) or because Windows 10 fails irretrievably and has to be reinstalled and the user doesn’t have any kind of restorable backups.

An upgrade of Windows, called an in-place installation, builds itself over the existing version, leaving in place much of that previous version. A clean install is 100% fresh because it removes all of the previous installation before it installs itself. It is the best kind of installation.

Of course, Windows Update will have to install all of the updates that have come out since Windows 10 was released officially on July 29, 2015. Therefore, it highly advisable to create regular backups and/or system images after a clean install so that if you have to reinstall Windows it saves plenty lot of time if the backup or system image is as up-to-date as possible, requiring Windows Update to do as little as possible.

Before you can upgrade a qualifying version of Windows to Win10, it has to be fully updated. Your qualifying version places a flag with a white cross in the Notification Area. Right-click on it to see the options to install Win10 or read information about it.

After you have given your permission for the upgrade to take place and it installs, taking as long as a few hours, depending on the speed of the computer, it should activate with Microsoft’s web servers immediately, providing a Product Key that is required to clean install Win10.

To find out if activation has taken place, follow this click path.  Start =.> Settings => Update & Security. Select the Activation heading. “Activation” should say, “Windows is activated.”

Product Activation – Windows 10 – “Windows is activated”. Click on the image to view its full size. 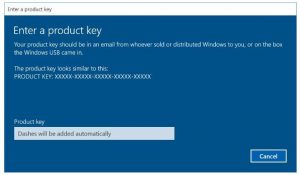 A Windows 7 and 8.1 Product Key can now be used to activate a clean install of Windows 10 upgrade

A Windows 7 and 8.1 Product Key can now be used to activate a clean install of Windows 10 upgrade to from Windows 7 and 8.1. Read the following article for more detailed information on that change to Product Activation.

If an upgrade of Win10 was arrived at from an OEM licence that brand-name PCs have, those letters – OEM – appear in the Product Key. An OEM version of Windows can only be installed on the computer it was originally installed on, it is not transferable, but a retail licence can be used on an unlimited number of PCs as long as only one computer is using it an any one time. Windows Product Activation can detect how many times a licence is being used and will only allow one computer to use a single-PC licence.

Find the Product Key in Windows 10

The Product Key is not easy to find in Win10. The easiest way to find it is to use a free tool such as the Belarc Advisor from http://www.belarc.com/ under Free Download on its website. When it is running on your computer, look on the left-hand side of the page for a link called “Software Licenses” and open it.

There are two ways to perform a clean install of Win10

There are two ways to perform a clean install, but whichever way you choose, in case something goes, wrong be sure to create a system backup or system image, using either the Windows Backup and Restore tool, retained from Win7, or a free third-party tool, such as Macrium Reflect (my preference).

The first option is to reset Windows 10 in the same way as Win7 and Win8.1 can be reset. To do that follow the following click path: Start => Update and Security => Recovery. Click on the “Get started” button of the “Reset the PC” option and choose to “Remove everything”. Doing that is not a 100% clean install just a cleaned-up install.

Here is how to get a 100% clean installation: Download the Windows 10 ISO file from this page (never download Microsoft software from anywhere other than Microsoft’s site or the Microsoft Store because it is likely to carry spyware or malware).

Note well that you’ll need the Product Key, discussed earlier, in order to be able to use the bootable installation disc or USB flash drive that is created.

Also, remember to create a full backup or system image before you upgrade to Win10 so that you can restore the system should anything go wrong.

You can use the Windows Media Creation Tool (WMCT) to burn the Win10 ISO file to a DVD disc or flash drive.

You can also use a third-party tool to burn the ISO to a DVD disc. I use CDBurnerXP, which has never failed me. I have never used it to transfer the ISO image to a flash drive, so can’t say if it works or not. Using it, open the tool and select its “Burn ISO Image” option and then browse to the downloaded file with a recordable DVD disc inserted in the DVD drive.

If the file is burned successfully, you have a bootable Win10 installation disc that, when used, installs a completely fresh copy of Win10 wherever you want to put it – replace the existing installation of Windows or on a different partition or even on to a different hard disk or SSD drive. The installation procedure will be more or less the same as the upgrade to Win10 was.

I would use the Windows Media Creation Tool (WMCT) to put the image on a flash drive.

To boot the system with a bootable disc or flash drive in a system that has a standard BIOS requires having the boot device set as the first boot device in the boot order of devices. Windows 8.1 and Win10 use the new UEFI BIOS that can prevent unrecognised boot discs or devices from booting the system. The web-search query “How to solve UEFI boot and startup problems” provides many articles on what actions are required to overcome that problem.

During the clean install, when you get to “Get going fast”, if you want to set the privacy-related settings to your preferences, you should choose the Customize Settings option instead of the Express Settings option, which installs Microsoft’s default settings that give Microsoft as much information about you as possible.