Cannot boot from DVD or USB flash drive – Windows 8 and 10 – UEFI Secure Boot problem. Click on the image to view its full size

If your computer, bought new, running Windows 8.0/8.1 or Windows 10 cannot boot from DVD or USB flash drive – from a backup rescue disc or some other boot disc, etc., the Secure Boot setting used by the new UEFI BIOS is almost always the cause of the problem.

Secure Boot is designed to allow only boot media that it recognises to boot the system, such as a Windows 10 repair USB flash drive that Win10 creates.

All desktop and laptop computers bought new (not upgraded from Windows 7, etc.) that run Windows 8.1 and Windows 10 have a UEFI BIOS – the replacement for the standard legacy BIOS in use for decades.

A Linux boot disc (e.g. Ubuntu) or an installation disc of an older version of Windows, such as Win7, might also fall foul of Secure Boot.

To disable the Secure Boot setting in the UEFI BIOS means having to enter the UEFI at startup or from within Windows 8.1/10. The quickest way is at startup.

Visit the UEFI BIOS and the Standard Legacy BIOS section of this website for detailed information on those types of BIOS.

Enter the UEFI at system startup by pressing a designated key

To enter the UEFI at startup, as the computer boots, press the key that does that. It is usually the Del or F2 key, but could be a combination of keys or any F key or the Esc key. This is also the way to enter a standard legacy BIOS.

The startup screen usually has a message saying something like Press Del to enter SETUP, as shown in the image of a startup screen below. Setup is the UEFI or standard legacy BIOS. The computer’s user manual or the manual provided by the manufacturer of its motherboard informs the user about the UEFI and how to enter it. The major motherboard manufacturers all have websites that provide user manuals for all of their models, usually in the PDF document format.

Startup screen showing which key to press to enter the UEFI or standard legacy BIOS. Click on the image to view its full size

Enter the UEFI from within Windows 8.1 and 10

If you cannot enter the UEFI at system startup by pressing a designated key of combination of keys, you have to enter it from within Windows.

The quickest way to enter the UEFI from within Win8.1 and Win10 is to press the Shift key while using Start => Restart. The system brings up a screen called Choose an option. Select Troubleshoot => Advanced options (shown in the image below) => UEFI Firmware Settings => Restart button that restarts in the UEFI BIOS. 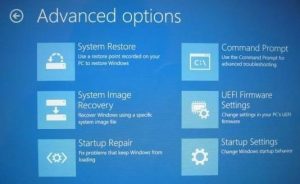 Cannot boot from a DVD or USB flash drive – UEFI Secure Boot problem. Click on the image to view its full size

The UEFI setting you want to disable is called Secure Boot.

There is also a longer click path that gets you to the UEFI from within Windows 8.1 and 10. Here it is.

If you need demonstrations, here are two videos that show how to enter the UEFI BIOS at startup and from within Windows 8.1 and 10. Information is also provided on the settings that can be enabled or disabled, such as Secure Boot.