Have a look at these excellent bargain Win10 devices – laptop, tablet and phone 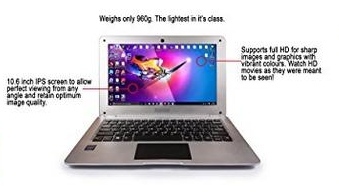 The Intel Atom x5-Z8350 processor is a System on a Chip (SoC), which means that it contains a graphics chip that provides the graphics of the device. Here is the page on Intel’s website on that processor:

Note that eMMC storage is not and SSD drive, it just the type of flash memory used in many tablets and smartphones, which can store and run Windows 10 and applications, such as Microsoft Office very well.

eMMC vs. SSD: Know the difference before buying a laptop –

The other key specifications

A Fusion5 10.1-inch Google Android 2-in-1 laptop (£125.00) and tablet (£100.00) are also available that run Android 5.1 Lollipop – an old 2014 version of Android. Note that Android devices should be provided with updates to the latest version. If not they become security risks.

“Having now used this laptop for a couple of weeks I have found no issues to complain about and indeed am very happy with my order. The laptop has surprised me in more ways than just speed and its nice to see that you can actually get good technology for a reasonable price now! Easy to recommend as a good little pocket rocket with a reasonable battery life and a nice slot for a typical phone SD card.”

“Nifty little pad. Ideal for travelling but the mouse pad can be a nightmare. Overly sensitive. Try and move the cursor and the screen suddenly minimises or drops to toolbar without warning. Cannot see how to adjust mousepad [touchpad] settings. Any advice would be grateful. Bit of a nuisance having to use a plug-in mouse. Other than that ideal. Fast and efficient.” 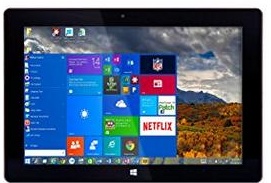 Note that, provided with enough storage space, Windows 10 tablets function as a normal desktop or laptop PC, unlike Google Android tablets that cannot run office and other applications, just apps. Moreover, all Windows 10 devices receive updates automatically, unlike Android devices, most of which do not. With many Android devices, you are stuck with the version that they came with, therefore, you should check if updates are provided before making a purchase. If you are new to computers, updates fix bugs and critical security flaws.

“I love this whether you call it tablet or computer. It is much quicker and smoother that I thought it would be. I installed all of my favorite productivity programs including Office 2016. I inserted a 128 GB flash drive [Micro-SD card] for a little bit of extra space. Excellent build quality, screen looks good and is very responsive. The keyboard [provided by the version with a keyboard] is very easy to use and I’m using it to type this review without an issue. The battery for the device lasts a very long time and the supplied charger can charge it in a relatively short period of time. I would say that this tablet greatly out performs my expectations. WiFi and Bluetooth both work great. Good tablet at a good price.”

“This is an amazing machine. Pin-sharp screen, to which the suppliers have attached a protective screen. Very fast – I have Office 365 loaded on this and on my Dell desktop, without any noticeable difference on performance. All apps loaded faultlessly, and readily found the wireless network. Plugging a USB four-way adapter into the proper full size USB port means that I an use all my peripherals simply plug and play.

“Instruction leaflet is the usual bizarre Chinglish, and in a font size so small you need a magnifying glass to read it – but as you all need to do is to put the machine on charge for seven hours, and then switch it on that hardly matters – everything else is intuitive to anyone who has used Windows or iOS.

“Support from UK supplier F5CS is exemplary. Query on [Windows 10] Product Key was responded to and resolved within minutes – at after 10:00 pm on Christmas Day.

“Any quibbles? There is no kickstand – I suggest you buy a Daffodil IPC410 Smart Phone and Tablet Stand, currently £2 on Amazon. 10″ screen size is fine – but, as it can do everything a desktop can, I will be the first to buy a 13” version when it comes out.

“All in all, an excellent product, and a very happy customer” 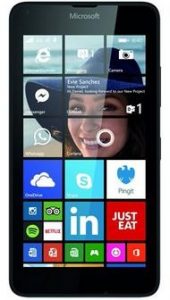 A smartphone that runs the mobile version of Windows 10 is really a very powerful miniature mobile computer that can run Microsoft Office applications and a choice of 350,000 apps available from the Windows Phone store. Lumia phones come with the latest Windows Phone features pre-installed, including the full Microsoft Office suite (Word, Excel and PowerPoint). Note that all phones that run Windows Phone receive the latest updates, unlike most Google Android phones, very few of which receive the latest version of Android.

The other key specifications

May 2015 – “Security and regular system updates were important factors in the choice of my next phone. Lack of system updates are a major problem for Android devices. My Galaxy Note stopped receiving updates after just over a year, and my LG G-Pad tablet still hasn’t received the promised Lollipop update [released November 12, 2014] despite still being a flagship device. Sure, I could get a Google branded Nexus, but I want the capability to upgrade my phone’s memory.

“So when Microsoft announced the new Windows phone range with updates “for the lifetime of the device” I did my research on the new Windows Phone features and ultimately bought this phone.

“Build & hardware features: The Lumia 640 is a well built phone, no creaks, a sharp screen clearly visible in sunlight that is also great for reading. Apps, downloads and podcasts can be installed to the micro SD card. The design is well thought out – the back cover contains the power & volume buttons and wraps around the sides up to the scratch-proof glass. When the cover does get worn over time, I expect to simply replace it and make the phone look new again.”