The Adobe Flash Player is now producing a warning, shown in the image below, when you open its applet in the Windows Control Panel. It states that if you are using the Google Chrome or Chromium-based web browsers (such as Opera), the user has to use the online Global settings webpage not the local onboard settings to set the Flash Player. 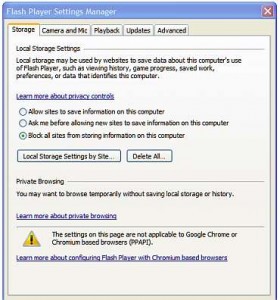 Adobe Flash Player warning that the online Global Settings Manager has to be used to set it for Google Chrome browser. Click on the image to view its full size

A Chromium-based web browser is one that is a development of the Google Chrome browser, the open-source code for which can be used by other browser developers to develop their own browsers. The Opera browser is an example of one.

As shown in the image below, the warning appears under the yellow triangle with an exclamation mark in it. It says: “The settings on this page are not applicable to Google Chrome or Chromium based browsers (PPAPI).

The link provided below the warning goes to this webpage:

It says: “Note that if you have installed the PPAPI version of Flash Player, you must use the Flash Player Native Control Panel to configure your update settings. If you are using Chrome, you will get the updated versions of Flash Player through the Google Chrome update mechanism.”

Here is the page on the Adobe website that allows users to set the Flash Player on their computers.

The Flash Player’s local settings in the Windows Control Panel

The Flash Player’s local settings are accessed via its icon in the Control Panel in Windows. The settings include allowing or blocking the use of the camera, microphone and allowing the website using the Flash Player to store information about the computer using it.

I block everything that can be blocked on my Windows computers, especially the Privacy settings in Windows 10, which are now exceedingly intrusive.

The Flash Player can also be installed on tablets and smartphones that use the Google Android mobile operating system, which means that you will have to visit the Global online settings page to set those devices.

Users should not take this potential of a very high level of invasion of their privacy lightly. I go as far as placing electrical tape over the camera on my laptop. You should also disable both the camera and microphone in the Windows Device Manager, since the Flash Player or websites that use it could enable them after an update.